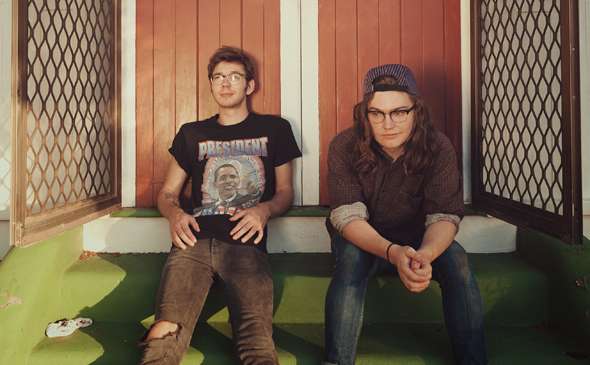 After ringing in the New Year with a standout performance at Peats Ridge Music Festival and appearances alongside The Rubens, DZ Deathrays and Bleeding Knees Club, Gung Ho have arrived in 2013 at the top of their game. With their forthcoming debut EP completed, Gung Ho will be celebrating its release by touring along Australia's east coast throughout February and March on the 'Anywhere Else' EP Tour.

Working out of home-studios, bedrooms and storage facilities around the country, the Brisbane-based two-piece have crafted their debut record with a unique DIY-aesthetic at the forefront. The first three tracks from Anywhere Else ('Twin Rays', 'Side By Side' and 'Strangers') have already received undeniable praise from listeners around the globe, with Triple J showing strongest support at home by providing high-rotation airplay for all three singles.

2012 was a groundbreaking year for the young band; a year that saw them tour relentlessly around the country to receptive audiences alongside the likes of Whitest Boy Alive (GER), Wavves (USA), Hunting Grounds, Yacht Club DJs, Last Dinosaurs, Millions, and Hungry Kids of Hungary. Having spent the last twelve months crafting their explosively tight live show on the road, Gung Ho are set to deliver their unique blend of surf-rock and post-punk influences to audiences like never before.

The 'Anywhere Else' EP Tour kicks off in Adelaide on February 22nd, with fellow Brisbanite Jeremy Neale supporting at all shows.