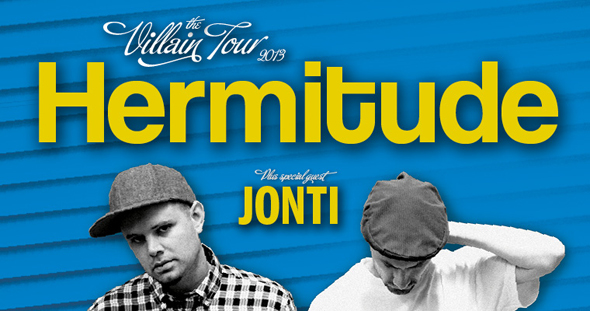 Hermitude's astonishing rise is set to continue as they announce a new single and 2013 tour.

Hermitude have risen to new heights in 2012 off the back of their incredible HyperParadise album and hit single 'Speak of the Devil'.

They've released worldwide (Regal/Parlophone & Astralwerks), sold out countless shows across Australia and internationally and in the process catapulted themselves into the festival circuit with spots at Groovin The Moo, Parklife and Homebake. Their production work has been in solid demand with remixes for The Presets, Missy Higgins and co-production credits on Urthboy's acclaimed Smokey's Haunt album.

They won an AIR Award for Best Dance/Electronic Release and have been nominated for two ARIAs (Best Dance Release & Best Video) and a j award for Australian Album of the Year. 'The Villain' is the fourth single from HyperParadise. It's a dark and pulsating piece of beat wizardry, designed to destroy club & festival PAs.

The accompanying music video directed by Kess Broekman-Dattner, sees Hermitude continue on with the dance theme made famous by their j award-winning video for 'Speak of the Devil', only this time there's a heist-like twist. They will be supported by South Africa-via-Australia's Jonti, a star on the rise whose Sine & Moon album was released on the legendary Stones Throw label. Jonti returns home to Australia having just supported Gotye across North America and Europe.