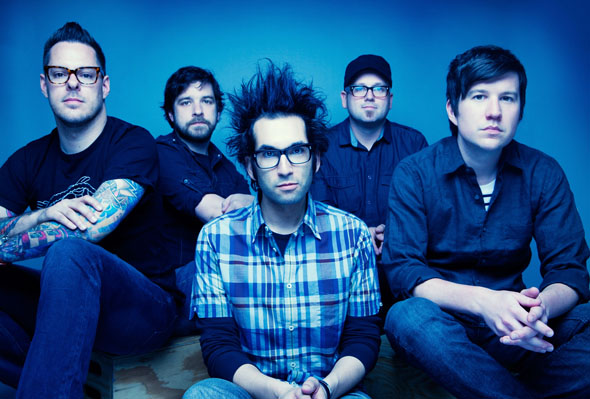 Absolute Punk succinctly put what we all know about MOTION CITY SOUNDTRACK. "From the raw earnest of I Am the Movie to the brilliance of Commit This To Memory to the experimentalism of Even If It Kills Me to the pop-punk clinic of My Dinosaur Life, MOTION CITY SOUNDTRACK has grown as musicians while never penning a disappointing album" .

The journey continues with MOTION CITY SOUNDTRACK as they are in the midst of a career renaissance with their latest release 'Go', the most mature and developed album of their fourteen-year career. 'Go' is a triumph in every way imaginable, from its tight thematic coherence and smart exploration of an emotionally complex topic, to its whip-smart arrangements and hook-filled song writing... "it might just be the best album MOTION CITY SOUNDTRACK have crafted to date." - Property of Zack

Six years have passed since New Jersey's THE EARLY NOVEMBER released what, at the time, appeared to be their final album. Sprawling across three discs, 'The Mother, The Mechanic & The Path' was a conceptual, grandiose and challenging record.

In March of 2007 THE EARLY NOVEMBER called an 'indefinite hiatus' much to the dismay of fans across the globe. Everyone felt like the band had so much more to give... so much more life. In 2011 fans were rewarded with their patience as the band not only reformed for shows but also with plans for a new album. 'In Currents' is a record that could have only been made by this band, at this specific point in time. THE EARLY NOVEMBER had to have the experiences they did in the past 10 years which are documented on this new album. The band have grown up, lived life and seen both its beauty and dismay. "In Currents is an introspective and thought provoking record displaying a gamut of emotional territory. But if this is it, then In Currents is a hell of a way to go out." - Absolute Punk

DEAF HAVANA seems to be an unstoppable force heading into 2012 and they now have Australia in their sights! Their new album 'Fools And Worthless Liars' is brutally, beautifully honest and "is everything the band have been threatening to be and more - mature, succinct, subtle and magnetic." - Punktastic