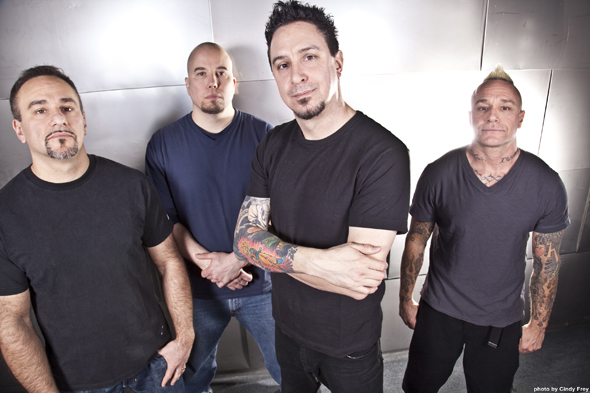 Since 1986, SICK OF IT ALL have been thrashing out classic Hardcore anthems and touring the globe relentlessly.

The latest album for SICK OF IT ALL is another sonic statement that further cements them as an institution of hardcore. 'Based On A True Story' is undeniable proof that the quartet is simply unstoppable and unrivalled within the scene in terms of quality and sheer impact. It's astonishing to see the band still boiling with rage at a world gone wrong and successfully transforming this natural and honest aggressiveness into brutal anthems. Their longevity and conviction has kept the band's reputation untarnished and legendary. As Metal Hammer puts it: "SICK OF IT ALL - are still the finest spokesmen for hardcore's social conscience and values", and this latest release will allow them to maintain this leading position for many years to come!

Often imitated but never duplicated, MADBALL have managed to perfect their patented chugging, grooving New York Hardcore sound, while always maintaining the same street-life inspired attitude that originally ignited the band's ever-smouldering flame. MADBALL are one of the few groups that can lay claim to achieving high marks in regards to all of the above, while also retaining an undying spirit that, to many, represents the heart of what the genre is all about.

This triple bill of Hardcore heavyweights could not be complete without VISION OF DISORDER.

One of the most innovative and widely admired bands to emerge from the never-ending collision between hardcore and metal is VISION OF DISORDER. They exploded from the streets of Long Island, NYC, with their self-titled debut album in 1996. With a burgeoning underground following who lauded the band's blending of their traditional metal roots with more adventurous melodic and rhythmic elements.

SICK OF IT ALL, MADBALL and VISION OF DISORDER are set to wreak havoc and incite wild pits across the country. Let disorder reign!

Tickets On Sale JANUARY 11 @ 9AM!
Need your live music fix?