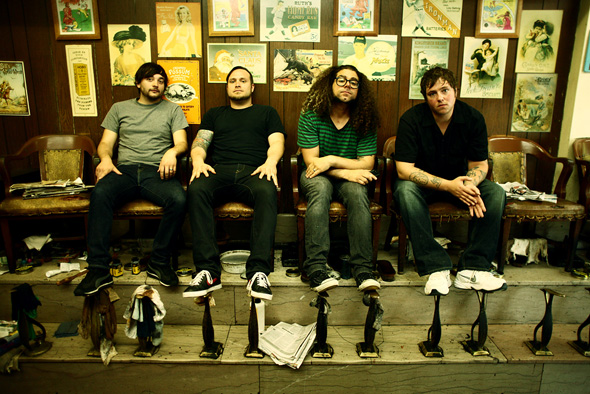 Soundwave Touring presents
COHEED AND CAMBRIA
with Circa Survive

It would be hard to find a band with grander artistic scope than COHEED AND CAMBRIA. They continue to remain a unique beast, impossible to classify and are simply this generation's greatest musical storytellers.

Following five groundbreaking albums, the New York foursome are back and in no less dramatic fashion than is to be expected. The Afterman: Ascension and The Afterman: Descension is an ambitious double concept album that is being unleashed in two separate full-length volumes.

The Afterman: Ascension is their greatest and most inspiring record to date. It is pure emotional sonic beauty. A powerful and inspiring series of songs challenging people to listen, understand, and discover. "It sparkles with invention, creativity, crushing use of dynamics" - Rock Sound

Voracious fans can now rejoice as the band announces their long awaited return to Australia. COHEED AND CAMBRIA's live show is just as intense and hypnotic, "It is a rare occasion, but once in a while fans will witness a performance as awe inspiring and memorable as the one Coheed & Cambria delivered. They transcended any expectations and left the crowd in jaw-dropping wonderment." - Hey Reverb

CIRCA SURVIVE are more focused and creatively fierce than ever. They have firmly cemented their place in the upper echelons of the rock world with their spectacular and intense live shows leaving all those present in awe.

With the release of their new album 'Violent Waves' CIRCA SURVIVE have never sounded better and in more control of their future. It sees them "at their most ambitious - a record that's equally intense as it is exquisite." - Absolute Punk