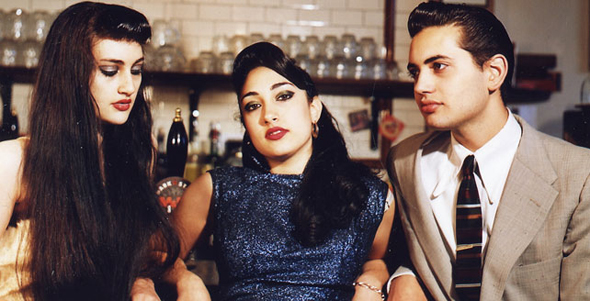 "Sounding fifty years out of time and traversing genres without concern, it is unlike anything else you will hear" Clash Music

It's rare these days to find an artist that captures your soul from the first instant you hear them - Kitty, Daisy & Lewis are such an artist. The Durham siblings from Northwest London infuse a variety of sounds that lean retro, but also push the boundaries of today's music

"the sound of yesteryear, but also a band for the future" NME

With their musical references and skills rooted in American rockabilly, jazz, blues, R&B, country and Jamaican ska of the 40s, 50s and 60s they believe in tradition where music was handed down, played and enjoyed at gatherings of family and friends. It's in keeping with that tradition they record on vintage equipment initially in their home studio modelled on the one at Sun Records and more recently at Atlantic Studios where the likes of Ray Charles recorded.

It's been a rapid rise for the two soulful sisters and their mad genius brother who share songwriting duties and uniquely combine multi instruments. Since the release of their debut a mere 4 years ago they have become style leaders for a generation of Fifties-obsessed, retro-clad twentysomethings, who reject contemporary culture. Their rise in popularity is also probably due in no small part to their always packed live shows which drive crowds into a Southern Evangelical frenzy!

Having now become Australian festival stalwarts by being invited to play every major Australian festival including Meredith, Falls, Sydney Festival and most recently the Big Day Out, KD&L will be here this time for Bluesfest. They will play two very special sideshows in Melbourne and Sydney and will be accompanied as always for their live shows by their father on rhythm guitar and mother, Ingrid on upright bass and legendary Jamaican trumpet player Eddie "Tan Tan" Thornton. Expect "touches of hillbilly swing, Hawaiian twang and even some ska … And fun, always fun" Bernard Zuel (TheVine) March 2013