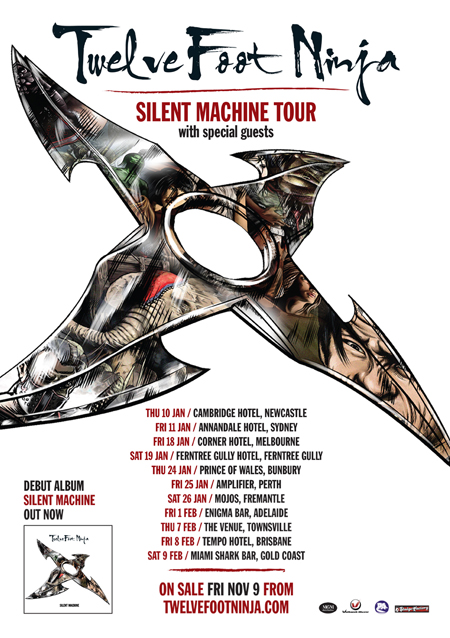 Presented by Sludge Factory, Premier Artists and Volkanik Music, Twelve Foot Ninja will embark on their biggest headline tour to date, heading to NSW, VIC, WA, SA and QLD. After cutting their touring teeth supporting the likes of Periphery (US), Tesseract (UK), Dead Letter Circus and Fair To Midland (US), Twelve Foot Ninja are finally ready to step it up a notch, and cement their reputation as Australia's next big thing in heavy alternative music.

The sheer breadth of Twelve Foot Ninja's musicianship on one body of work shows a fearless approach to their debut album. When the band first announced their album release date, fans crashed the band's website in the rush to pre-order. Then the Australian music press joined in the fanfare, delivering 5 star reviews, one of which hailed Silent Machine as 'the best heavy music album of the year'.