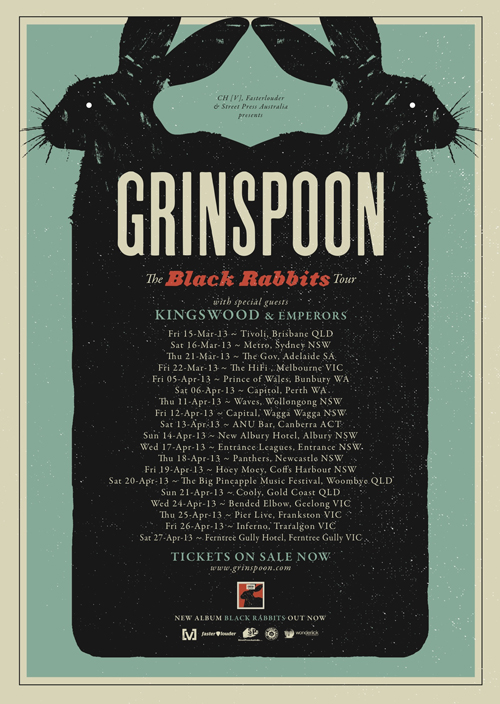 Grinspoon, one of Australia's most loved live rock bands are hitting the road and coming your way.

In September this year they released their seventh studio album, 'Black Rabbits' which made its ARIA chart debut at #8. It's only fitting that with the release of a new album and now 7 Top Ten albums under their belt that the band gets back on the road and tour.

The Lismore-born quartet - Front man Phil Jamieson, Guitarist Pat Davern, Drummer Kristian Hopes and Bassist Joe Hansen - burst onto the national music scene in 1995 via a string of hits which later appeared on their 1997 debut album, Guide To Better Living. Across their career the band have amassed album sales of 500,000 copies in Australia, including multiple platinum certifications and the ARIA award for 'Best Rock Album' in 2005 for Thrills, Kills & Sunday Pills.

Grinspoon kick off 2013 playing the Big Day Out shows across the country in January with a special 'All Hits' set with just a couple of new tracks thrown in.

In March the band embark on their National 'Black Rabbits' headline tour which will be a whole new live show for fans who've experienced the explosion of energy, sound and good time rock 'n roll that is Grinspoon. These shows will be the longest set the band have ever played, with a mix of everyone's favourites and a healthy selection of new tunes from the new album, 'Black Rabbits'

This is a series of shows not to be missed for old & new Grinspoon fans!