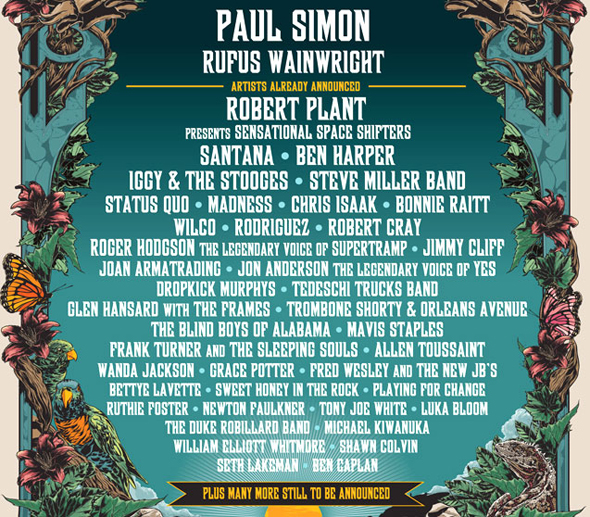 Bluesfest, Australia's multi award winning Festival held over the long Easter Weekend (March 28 to April 1) treats its Audience and all Music lovers across the country to a massive Easter Monday surprise. Yes, it's time to take a breath and sit down!!

Paul Simon, multi-award and 13 time Grammy winner, has today been added to the supreme Bluesfest line-up of 2013.

Simon will be performing at Bluesfest on Easter Monday but there is more! Festival goers are in for a double treat: Taking the stage before Paul Simon will be the hugely gifted Canadian singer/songwriter & composer Rufus Wainwright.

The 2013 Bluesfest bill is truly shaping up to be the biggest one yet.

"Adding Paul Simon to Bluesfest 2013 is pretty mind blowing, even for me, your Festival Director.

I knew the line-up was going to be massive, but it just keeps getting bigger. So many incredible artists are going to perform at Bluesfest, it really is every Festival Director's dream come true and I am so humbled. Announcing Robert Plant a couple of weeks ago and now adding Paul Simon, it's like: Wow…we are really doing it this time and I actually think we are breaking all previous records. This is going to be the best Bluesfest of all time and guess what? There are at least another 4 announcements to come featuring major artists."