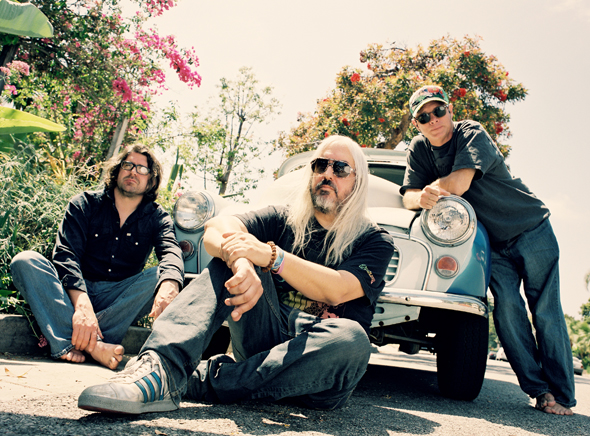 Having completed a sold-out solo east coast tour earlier this year, J Mascis returns to Australia in 2013 for a national tour. This time, however, Mascis is bringing his pals, drummer Murph and bassist Lou Barlow, along with him as they prepare once again to give listeners a dose of the live aural-onslaught that is Dinosaur Jr.

The tour comes off the back of I Bet On Sky, the third album to be released by the iconic trio since their unlikely reformation in 2005. And like it's post-2005 predecessors, Farm and Beyond, Sky... is yet another critical and fan-fave and continues the phoenix like rise of these alt-rock superheroes.

Holy Smoke, Dinosaur Jr have delivered another rockin' album! - Rip it Up

Meredith's Golden Plains Festival were the first to offer Dinosaur Jr an invite - a repeat performance following a stand-out show at the same event in 2010.

Dinosaur Jr. was the highlight of the festival. The songs were spot on and despite them playing to a field of drenched rats, the crowd was loving every minute. That was the best fun in the rain I've had in a long time. - UNDERCOVER MARCH 2010

But that's not all, joining Dinosaur Jr across select dates is a who's who of underground rock 'n' roll royalty (and those soon to be anointed) including LA 's supreme power-pop outfit Redd Kross, the glorious howl of The Jon Spencer Blues Explosion, Sydney's raw punk exponents Royal Headache and space-rock outfit Moon Duo - a veritable record store clerk mixtape!