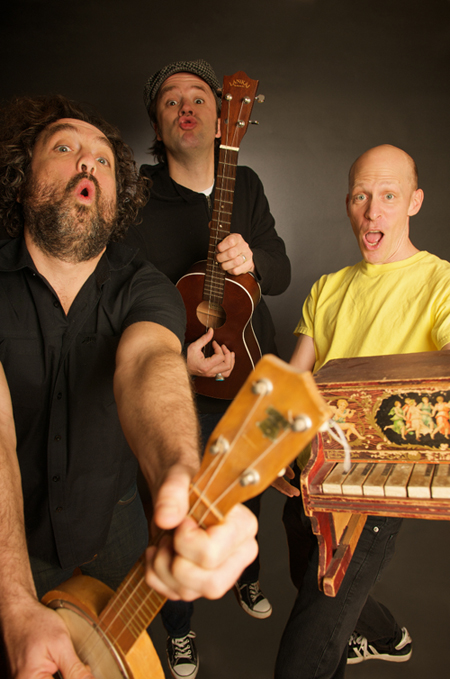 KillRockStar Big Dog Entertainment are excited to present 90's pop rock legends The Presidents Of The United States of America live in Australia in 2013 playing their classic, 5 x platinum, self-titled debut album in its entirety along with all their greatest hits.

In 1995 Seattle outfit Presidents Of The United States of America launched their self-titled debut album and in the process took the world by storm with their unique take on guitar based pop rock. Armed with their uniquely modified electric guitars, an arsenal of perfect infectious pop hooks and super-smart songwriting skills the band scored massive hits around the world with the singles Lump, Peaches and Kitty. Whilst there was no doubting the extreme catchiness of POTUSA's songs it was the undeniable sense of humor and fun with which they were delivered that really won the affection of music lovers of the decade.

The Presidents Of The United States of America's connection with this country has been a long and fruitful one with the band wholeheartedly embraced by Australian music lovers with their first two albums going five times and two times platinum respectively. Off the back of their 2004 album Love Everybody The Presidents toured Australia to packed houses selling out all shows in record time, so much so that they were back in the country playing to adoring fans some six short months later.

Formed by childhood friends Chris Ballew (lead vocals, two-string basitar) and Dave Dederer (three-string guitbass, backing vocals), the duo played together in a number of projects before forming The Presidents of the United States of America in 1990. The newly named outfit recorded a demo tape, which began circulating around the Seattle musical community and, in the process, earned them a cult following. Drummer Jason Finn joined the band in 1993 and within a year the Presidents became one of the most popular bands in Seattle.

In the spring of 1994, they released their eponymous debut album on Pop Llama Records. The record became an independent hit and the band attracted the attention of Columbia Records, who re-released the Presidents' debut in the spring of 1995. The Presidents of the United States of America became a hit in the US summer of 1995, when MTV and modern rock radio began airing "Lump" frequently. "Lump," followed by the radio hit "Kitty" in the fall and the radio/video hit "Peaches" in the spring of 1996, propelled the album to a surprise Top Ten, double-platinum status.

Over a number of further album releases, including II (1996) - which went double platinum in Australia, Pure Frosting (1998), Freaked Out and Small (2000), Love Everybody (2004), These Are the Good Times People (2008) and a couple of periods of hiatus which featured changes in personnel and the permanent inclusion of Andrew McKeag on the guitbass the Presidents Of The United States of America have been back on the road with a renewed vigor bringing with them all the feel good infectiousness that has made them longtime favorites the world over.