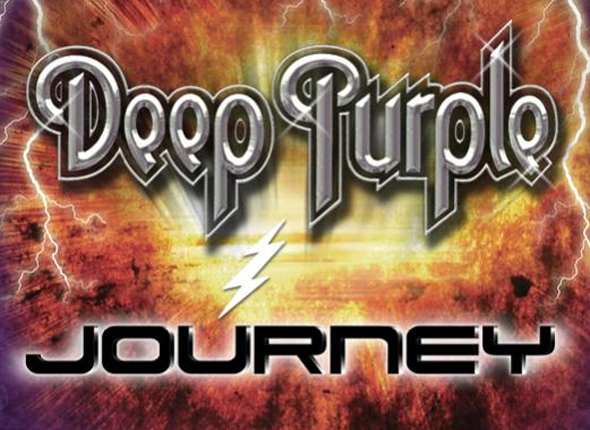 They remain the quintessential vintage rock band - playing the songs the people love ... pushing the boundaries as individual instrumentalists, soloists without reservation, yet seamlessly integrated into the overall sound and texture of a unified group. This is the foundation on which Deep Purple has always thrived – VintageRock.com.au

They put on a show that captured perfectly everything Journey is about: effervescent vocals, sing-along hooks, and most importantly, a big sound with big ideas – US Music Weekly

Chugg Entertainment have announced details of the rock ‘n roll summer bill of the year with legendary groups DEEP PURPLE and JOURNEY set to tour New Zealand and Australia in February/March, 2013.

DEEP PURPLE has sold over 100 million albums worldwide with iconic hits including Black Night, Highway Star, Space Truckin', Hush, My Woman From Tokyo, Perfect Strangers and Knocking At Your Backdoor and Smoke on the Water, arguably the song known by generations of music lovers worldwide and celebrating its 40th anniversary this year.

Ian Gillan, Roger Glover, Ian Paice, Steve Morse and Don Airey continue to travel the scope of hard rock - the textures and nuances of recent works are anything but thudding retreads. If you set a random play setting for the band's entire catalogue, the result is one of the finest musical outputs to grace rock music.

Having amassed so many songs that get coined under the "classic" moniker, set lists have been a never-ending debate among diehards and newer fans. But DEEP PURPLE has been more than in synch with fans' tastes to remain a powerful drawing force since their formation in 1968.

Nominated for the 2013 Rock and Roll Hall of Fame, DEEP PURPLE are currently preparing to unleash their latest album of brand new material in February, 2013.

Ian Gillan added "What a fabulous tour. I'm really looking forward to this and want to be in the crowd! Deep Purple AND Journey? Amazing!"

Joining DEEP PURPLE on the road for their first tour of Australia and New Zealand is legendary San Franciscan rock outfit, JOURNEY.

JOURNEY is one of the most popular American rock bands of all time, creating some of the best-known songs in modern music including Don't Stop Believin', Anyway You Want It, Faithfully, Who's Cryin' Now and Open Arms. Since the group's formation in 1973, the band has earned 19 Top 40 singles and 25 Gold and Platinum albums in the US with their Greatest Hits album going 15 times Platinum.

JOURNEY's 2011 Eclipse World Tour was one of the band's most successful tours ever, drawing nearly a million fans and ranked in the Top 15 Tours of the year. In honour of their significant and lasting contributions to live music and the touring business, and in acknowledgement of their commitment to the fans and the art of performing live, band members Neal Schon (lead guitars, backing vocals), Jonathan Cain (keyboards, guitar, backing vocals), Ross Valory (bass, backing vocals), Deen Castronovo (drums, percussion, backing vocals) and Arnel Pineda (lead vocals) were awarded the prestigious "Legend of Live Award" at the 2011 Billboard Touring Awards.

"Things are opening up everywhere we go," states Neal Schon. "Journey is a world band now".

Chugg Entertainment's Executive Chairman, Michael Chugg, said "To have two of the world's greatest ever rock bands on stage together is something we're so proud to be involved with. These shows are going to tear the house down!"

Don't miss your chance to see these two legendary rock acts share the stage in 2013!

Tickets On Sale 9AM NOVEMBER 12!