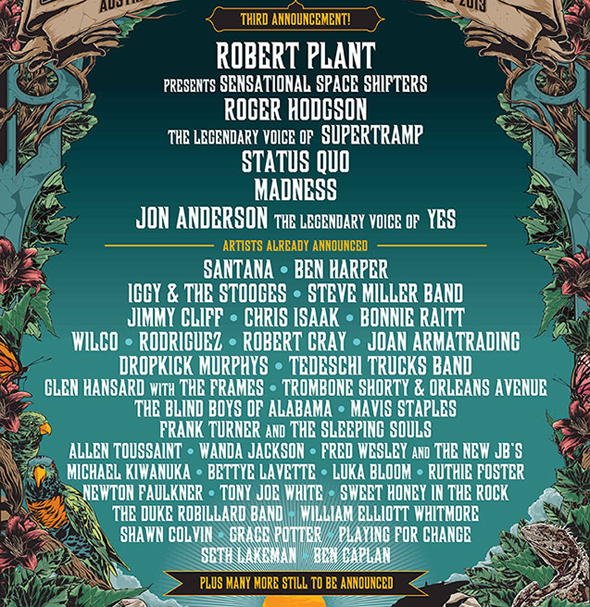 Led Zeppelin came to Australia in 1972 and a Robert Plant Tour of Australia has been long awaited by his Australian fans. He last toured in 1996 with Jimmy Page. Plant was voted in the Rolling Stone Readers Pick in 2011, 'The Best Lead Singer of All Time'. Even greater is the news that he has been performing 8 Led Zeppelin songs on stage on his current South American Tour. Now the wait is finally over – Robert Plant is coming to our shores and will headline Bluesfest on Saturday 30th of March.

With this 3rd announcement it really feels like Bluesfest 2013 is delivering the best line up of its history.

Bringing Robert Plant to Bluesfest is a dream come true, not just for me, but for the thousands of fans who have been standing by patiently all these years!! We have waited together for so long and now it's gonna happen – I am so delighted and hugely honoured.

Welcoming back Roger Hodgson - The Legendary voice of Supertramp for the 2nd time is another absolute highlight. If you missed Roger Hodgson in 2010 don't do it again. His songs "Give a Little Bit" and "Lord Is It Mine" continue to give me goose-bumps after all these years. There are just too many hits to name them all, and Roger's voice is just as it was all those years ago.

Status Quo, Jon Anderson and Madness: these are artists who are world class and give Bluesfest its icing on the cake, but we are still not done yet. There are still more artists to be added in the upcoming weeks, but for now let's revel in the wonderment of this 3rd announcement.

The 24th Bluesfest will take place between Thursday 28th of March and Monday 1st of April 2013 at Bluesfest's permanent home at Tyagarah Tea Tree Farm just outside of Byron Bay.