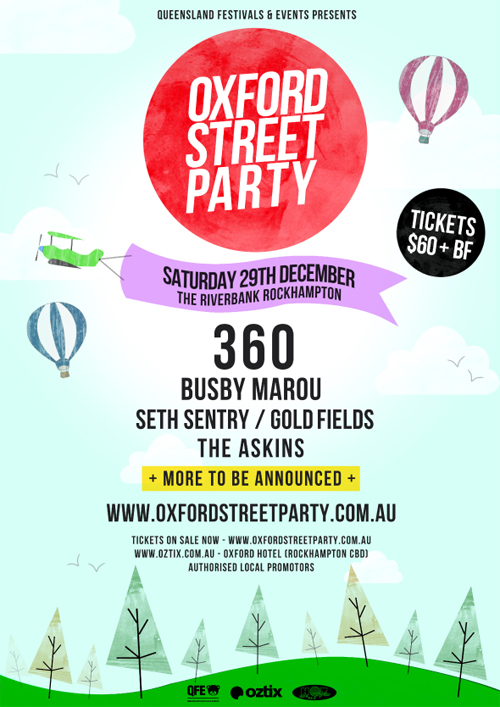 For the sixth consecutive year, The Oxford Street Party held in Rockhampton, central Queensland will host some of Australia's hottest acts.

In line with recent years, organisers have again secured a line-up of some of the most popular and exciting musicians Australia has to offer.

Arguably the hottest touring act in the country right now, 360 will make his central Queensland debut at this year's Oxford Street Party.

The chart-topping Aussie hip-hop phenomenon has just taken poll position in the 2012 ARIA awards, securing ten nominations including Album of the Year and Best Male Artist.

This topped off an amazing year for the young rapper who's hit single Boys like You went four times platinum and staying in the top 50 ARIA charts for over 12 months now.

Hosted by Queensland Festivals and Events (QFE), the Oxford Street Party was established in 2007.

Since then, the event has grown in popularity with sold-out crowds year after year. The annual event has attracted hugely popular Australian musicians to its stage including Boy & Bear, Drapht, Bluejuice, Art vs Science and the Stafford Brothers.

The street party remains a drawcard for many partygoers to travel to Rockhampton from all over central Queensland and remains as the region's undisputed premier music festival.

QFE Managing Director, Josh Jones said that he was excited to bring such prestigious tour artists to the region and that with the line-up this year's event was not-to-be-missed.

"After six years the word has certainly spread within the artist community that the Oxford Street Party is a must-play regional festival. The artists love the energy the central Queensland crowd puts out every year, it's always pretty wild," Mr Jones said.

"QFE has proved in the past that we can bring the big names to Rocky and this year is no different. It's getting much easier to attract top acts to the Street Party and I'm really excited to have 360 headlining this year. It's a big coup for the event."

The Street Party will have a new home in 2012, the riverside carpark opposite Rockahmpton's Sea FM headquarters on Victoria Parade.

It's a case of take two for the venue which was set to be the event site in 2010 before the devastating Queensland floods put the site under 4 metres of water.

"The new site is perfect for a festival such as this one," Mr Jones said.

"It is such a workable space and had a fantastic backdrop of the Fitzroy River, I can't wait."

The Oxford Street Party will again feature as a key event in central Queensland's festive season, being held on Saturday 29th December.