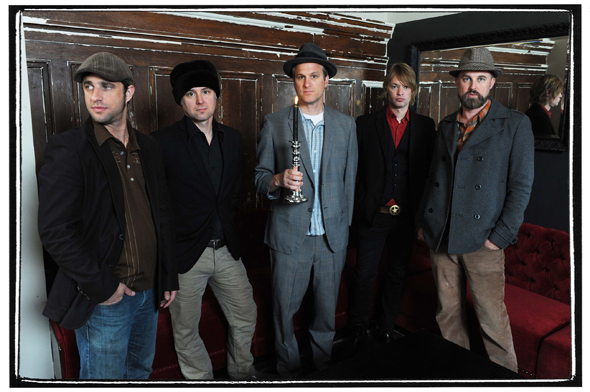 Harvest presents
An Evening with
CAKE

If as a band you could be represented visually by any artist in the world - painter, sculptor, animator, fimmaker, anyone - who would it be?

'The Matisse cut-outs are similar in style; roughly graceful and assertive, and finding balance on topsy-turvy ground. Then again, sometimes life on the road feels a lot like a Wes Anderson movie.' Vincent DiFiore, CAKE.

Formed in the early nineties as a somewhat antagonistic answer to grunge, which they saw as just another form of big, dumb American rock, CAKE's democratic processes, defiant self-reliance, and lucid yet ever-inventive music has made them a nation-state unto themselves, with no obvious peers, belonging to no school.

Having succeeded beyond their twentieth anniversary, CAKE's adherence to their original guiding principles has only grown stronger. Last year the personality-laden, culturally-aware and academically-endowed outfit released their 6th album - entitled Showroom of Compassion - brimming with the deadpan brilliance that has seen them step over the exhausted bodies of many of their peers and continue into the twentieth century, not just surviving but thriving.

In November 2012, CAKE will astutely command not only the festival stages of Harvest but their own as well; playing ADELAIDE and SYDNEY at their ONLY Australian sideshows.