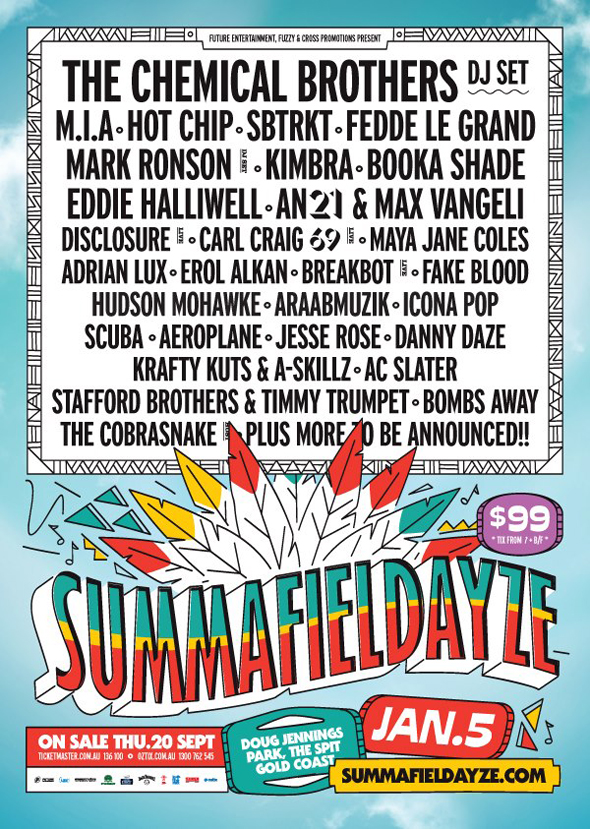 Welcome back to the oh so sunny Summafieldayze - where we deliver everything you want and a whole lot more! An Aztec acid daydream full of rollin' hills, new Summa sounds and creamy vanilla skies. Come vibe with your tribe, and be part of the new dance. Lucid lines, punchy patterns - summa has a new sketch, so shake your tail and your feathers...

It's the start to YOUR New Year and what better way to welcome 2013 than with Australia's most iconic summer festival. Having reached cult like status, each year it takes the nation by storm. So get set as Summafieldayze returns with a kaleidoscope of sounds in January 2013, armed with an inspired lineup jam packed with enough block rocking beats to leave you in a spin!

Once again, Australia's most intriguing and authentic Summa music festival will descend upon the picturesque setting of the Gold Coast's Doug Jennings Park on Saturday, January 5th for what will undoubtedly be another unforgettable Summa experience!

"It's been super fun, it's been a dope ass vibe. The chemistry is f#$*king amazing" – Spank Rock, Summafieldayze 2012

For more than a decade, Summafieldayze has ruled supreme as Australia's most iconic Summer/New Years celebration - and it's easy to see why. Year after year Summafieldayze has bought you the biggest and best international live acts of our time, while introducing Australian audiences to an inspired selection of the most talked about new acts from around the world. Who can argue with Snoop Dogg when he says...?

"Off the hook, off the chain fo shizzle dizzle. I mean from top to bottom I've been having a great time. The people have been outstanding, and the energy has been right, the cast has been beautiful. This has been a great experience, I hope I can do it again" – Summafieldayze 2012

So, don your brightest feathers, Aztec patterns and painted stripes. Follow the chant and get ready for the ultimate Summa celebration. Hold on tight, this year's it's going to be one hell of a ride!

Get ready as we prepare to raise the proverbial roof once more and force the festival stage into overdrive. Summafieldayze is back – the countdown is officially on!

Check out this year's line-up: