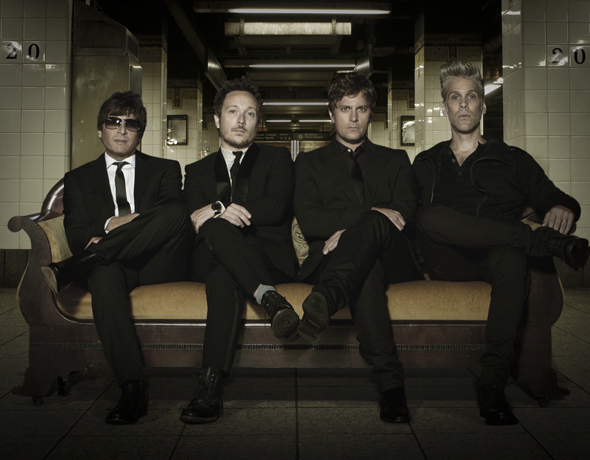 In their sixth Australian tour, Matchbox Twenty headline arenas around the country, as well as playing a special open air show at Hope Estate in the Hunter Valley.

Be there to sing along to the classics from Matchbox Twenty's hit-packed back catalogue plus a selection of soon-to-be hit tunes from their new album.

Matchbox Twenty will be joined on tour by great friends and Aussie legends INXS, touring with their new lead vocalist Ciaran Gribbin and performing their own greatest hits heavy hour long set, as they celebrate the 25th anniversary of the release of their classic 'KICK' album.

Tickets for all shows go on sale at 9am Friday August 31, and will further extend Matchbox's astounding tally of over half a million tickets sold around Australia during their 15 year touring history.

Known worldwide for their multi-platinum pop-rock tunes, Matchbox Twenty have sold an incredible 30 million-plus records, including more than 1.6 million sold within Australia since their 1997 debut.

Lead singer Rob Thomas is a prolific songwriter and hugely successful solo artist in his own right. Collaborating with legendary artists on a multitude of projects, Thomas also released his 2005 #1 debut solo album 'Something To Be' - featuring the #1 worldwide smash hit 'Lonely No More' and 'This Is How A Heart Breaks' - and 2010 follow up album 'Cradlesong'.

On Friday August 31, Matchbox Twenty unleash their brand new album 'North' (Warner Music), featuring what is predicted to be one of the band's biggest hits, 'She's So Mean'.

Joining Matchbox Twenty at all shows will be very special guests INXS.

INXS need no introduction - a household name etched in Australian music history since the 1980's with hits such as: 'Original Sin', 'Burn for You', 'Kiss the Dirt', 'Listen Like Thieves', 'Suicide Blonde', 'Beautiful Girl', 'Mystify' and 'What You Need'.

This September INXS celebrate their 1987 #1 album 'KICK' with the release of four deluxe 25th anniversary editions (through Universal Music).

'KICK', INXS' sixth album release, broke the band around the world with massive hits 'Need You Tonight', 'New Sensation', 'Devil Inside', the ever elegant 'Never Tear Us Apart' and went on to sell more than 14 million copies.

Since their self-titled debut release in 1980, INXS have sold more than 30 million albums worldwide, earned six consecutive Top 10 UK and US albums, and have performed to a combined audience of more than 25 million people across 50 countries.

Expect to hear all the hits, classics and more when Matchbox Twenty, with special guests INXS, take to the stage this October.