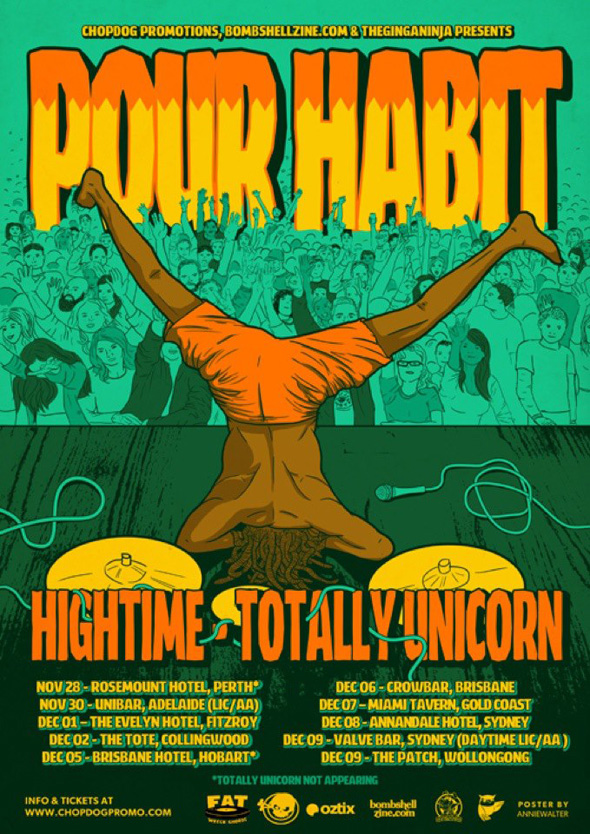 If you believe ancient history, the god-fearing and everything Hollywood tells you then December 2012 is the earth's grand finale and with the recent spate of zombie-esque crimes then it's not that hard to be sucked in to this way of thinking. But if there is one thing we know, it's when we go down we're going down partying and there is no better band to do that with than California's POUR HABIT. A band who undoubtedly wrote the book on “how to party”.

The party crew from Long Beach, California are no strangers to the long flights and drives that are Australian tours making their first tour down under with legends NOFX and BAD RELIGION in 2009 but in November / December 2012 the guys will be headlining their own run of dates taking in as many places as they can, all to spread the “Gospel of Good Times.” If there is one thing we learnt from their 2011 Fat Wreck Chords release “Got Your Back” and previous shows in this country it's that these are the people you want around when the world ends.

Joining them on the junket are Adelaide's party-punk outfit HIGHTIME who released “Ishi Prende” in 2011 through Pee Records and, as a result, have set the bar for the rest of Australia's releases from here on out. Their ability to mix the weirdest of genres and always come out the other side with music that makes people dance in a hurry means there is no one else we would want to ride the flames of the rapture with.

As if that wasn't enough to get your attention, there had to be another band in this country that could teach us a thing or two about partying with class and so when we looked that up in the dictionary we only found two words…TOTALLY UNICORN. Their reputation to incite front-of-stage riots, a certain promo picture not to mention their highly acclaimed EP “Horse Hugger” meant the decision practically made itself. The herd have been in the studio working on their follow-up, a two track 7-inch aptly titled “7 inches”. We're not sure if that's human inches or unicorn inches but it's going to be a lot of inches, regardless. With the exception of Perth and Hobart, these mythical creatures will be appearing on stage and hanging their arses out at Armageddon.