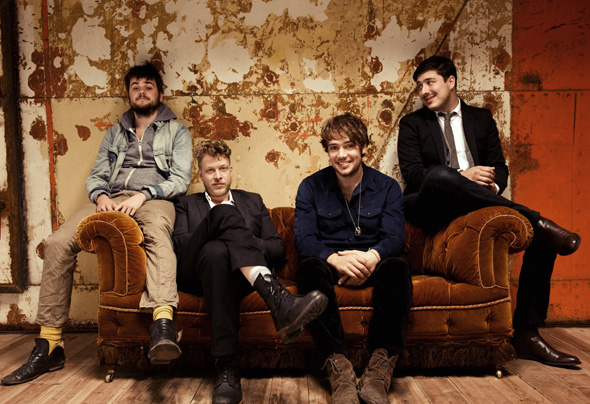 Mumford & Sons, in conjunction with the teams behind the Laneway Festival and Splendour in The Grass, are pleased to announce details of Gentlemen Of The Road (A Camping Stopover) in Dungog NSW on Saturday, 20 October.

The one-day, outdoor event in the historic NSW town is part of a global series of GOTR Stopovers, which debuted in the UK this June. The Gentlemen Of The Road concept was developed by the members of Mumford & Sons, with the band curating the line-up and overseeing the details of the festival themselves.

Mumford & Sons are readying their new album Babel for worldwide release on 21st September (via Dew Process locally), meaning that Australian audiences will be among the first to hear the new songs live. The band - whose debut Sigh No More sold an astonishing 5 million globally - hold a special place in their hearts for Australia, where they topped the 2009 Hottest 100 with their heart-stopping 'Little Lion Man' and went 3 x platinum and to the top of the ARIA Chart with the album. The brand new single 'I Will Wait' was premiered on triple j this morning.

The band say: "The Gentlemen Of The Road Stopover is based loosely upon our favourite festivals like Colorado's Telluride Bluegrass and Scotland's Loopallu Festivals. We want to stop off in towns not usually heavily toured by bands, and celebrate the people, food and music that inhabit them. We're keen to promote the town's local businesses, and we'll be using the local bars and venues for aftershow parties, whilst working closely with the local people to get everyone involved in making these shows spectacular. There will be a host of our friends playing too, and the vibe falls somewhere between 'travelling Victorian circus' and 'Victorian travelling circus'. It should be a whole lot of fun."

The show will be headlined by Mumford & Sons, and will feature the following acts:

Mumford tour buddies EDWARD SHARPE & THE MAGNETIC ZEROS - the authors of the ubiquitous 2010 hit 'Home' - join the party. The euphoria-inducing 12 piece collective are led by the enigmatic Alexander Ebert (there's nary an Edward Shape character in sight) and have been widely praised for their exhilarating live performances. They will be demonstrating the effectiveness of their new album Here in propelling people to a all-out singalong at Dungog this October.

The indomitable SARAH BLASKO will be performing in Dungog on the eve of the release of her fourth studio album. A musician of great integrity who pushes creative boundaries, Sarah Blasko's charismatic live show is the perfect addition to this stellar line up. Her forthcoming self-produced album was mostly recorded in Sweden, but Sarah also spent some time in Bulgaria recording with the Bulgarian Symphony Orchestra to create what is likely to be her most acclaimed and personal album to date.

Patience and hard work is paying off for 22 year old MATT CORBY, whose breakout track 'Brother' polled at #3 on last year's Hottest 100 (just a few months after its release) and propelled his 'Into The Flame' EP to an incredible 4 x Platinum sales. Matt is looking set for international success, having released an EP via Communion (the label imprint headed by Mumford's Ben Lovett) and signed an international deal with Atlantic.

Melbourne's HUSKY hold the prestigious claim to be the first ever Australian signing to seminal U.S. label Subpop. Not that their rich harmonies and artful songwriting went unnoticed here in Australia first. Their gorgeous debut History's Door was nominated for an Unearthed J Award and they won over a legion of fans supporting Gotye, Laura Marling and Noah & The Whale. Mumford & Sons have described their fellow folkie WILLY MASON as "one of the great songwriters of our generation". High praise that the US singer must be accustomed to by now, having released his first widely-acclaimed and commercially successful debut Where The Humans Eat at age 19. His highly anticipated third studio album If the Ocean Gets Rough is set to drop in the coming months and you should take a listen to the sprawling taster, 'Restless Fugitive' here.

YACHT CLUB DJS round out the line-up with their late night party jams. Hailing from regional Victoria, Yacht Club DJs have earned their reputation as Australia's foremost mash-up act. The Ballarat pair has come a long way from good friends mingling at the local, having found their common ground in their eclectic and diverse taste of music ranging from pop to metal and hip-hop, plus a little bit of Australian larrikin. Not bound by genre, their skilful mixes and carefully chosen edits illustrate each half's unique tastes, coming together to create an epic party atmosphere.