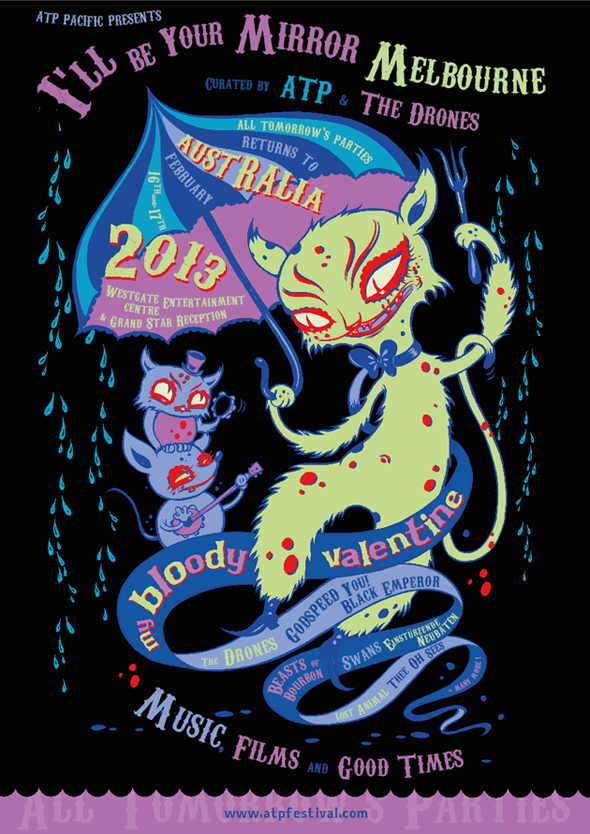 Described as the "ultimate mix tape", All Tomorrow's Parties is a boutique festival that goes against the grain of the larger, more commercial music festivals - with quality and customer experience coming first - presenting award winning sound and acclaimed organisation.

Each new All Tomorrow's Parties event invites an artist or band to handpick their favourite performers to play at the festival. In 2009 ATP presented its inaugural Australian series of events headlined & curated by Nick Cave & The Bad Seeds at Mt Buller Victoria, Cockatoo Island Sydney and Riverstage Brisbane to widespread critical acclaim.

"For all the many and varied highlights, ATP was infinitely greater than the sum of its parts. The music, the vistas, the people, the atmosphere: for all those lucky enough to attend the inaugural Australian ATP, this was an event to cherish forever." - The Australian

After years of fan emails and letters, ATP will return in February 2013 for a very special I'll Be Your Mirror event in Melbourne. Acting as sister events to the ATP Festivals which usually take place in holiday resorts, I'll Be Your Mirror is a series of artist curated music, film and art events taking place in cities worldwide, launched by ATP in 2011. IBYM is ATP without the accommodation aspect and is named after the b-side to The Velvet Underground's original All Tomorrow's Parties 7" single.