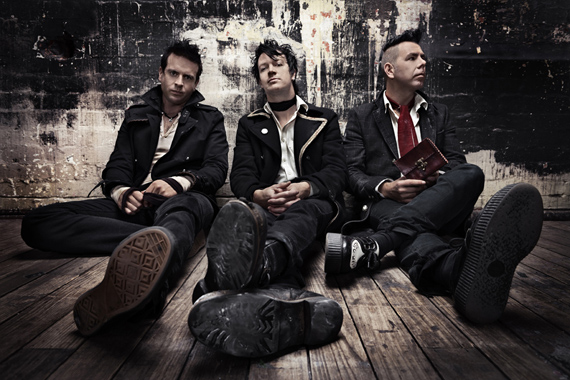 THE LIVING END are thrilled to announce that they will embark on an unique and ambitious tour this year. THE RETROSPECTIVE TOUR will see Australia's legendary rock'n'roll sons play each of their six albums IN FULL, back-to-back, start to finish, across 35 shows in five capital cities.

This will be the very FIRST TIME each album has been performed live from start to finish, and the feat will almost certainly be the first time any Australian band has undertaken such an inspired tour. The Retrospective Tour will not take in stadium-sized venues either. Perth, Adelaide, Sydney, Brisbane and of course Melbourne will get seven shows across seven nights in intimate club venues, each with a limited capacity. Seven shows and only six albums you ask? Well, eponymous Australian classic album 'The Living End' will get two airings in each city.

The idea of The Retrospective Tour is to give a big TLE-style 'THANK YOU' to all those fans who have bought the albums, come to shows, shown their support and been intensely loyal to the band over the past 15 years. There is something there for everybody, whether you are a die-hard fan of the seminal 'The Living End' album or fell prey to the hard-rockin' riffage presented on The Ending is Just the Beginning Repeating, or something in between. This will be the fans only chance to watch TLE pull out their most memorable, fiery live shows, performing some never-played-before favourites alongside career classics.

As always, devoted fans get a head start during the ticket PRE-SALE, commencing Mon Jul 16 at 9.00am (local time) and ending 11.59pm (local time) Wed Jul 18. Punters need only join the TLE mailing list at thelivingend.com prior to 5.00pm on Sun Jul 15 to receive the access password.

And for those punters dedicated to seeing all six albums performed live, the band offer THE BIG RED TICKET. This is a one-stop pass to catch every album performed live across six shows, in one neat little discounted package. The Big Red Ticket is available via Oztix from the pre-sale to Thu Aug 02.

This is an adage often bandied about, but The Retrospective Tour truly is a ONCE IN A LIFETIME OPPORTUNITY for fans to relive their favourite portions of The Living End's illustrious career (or all of them). Best be poised to secure tickets early and get retrospective come the end of the 2012.

Seven shows in a row / One album in full per night