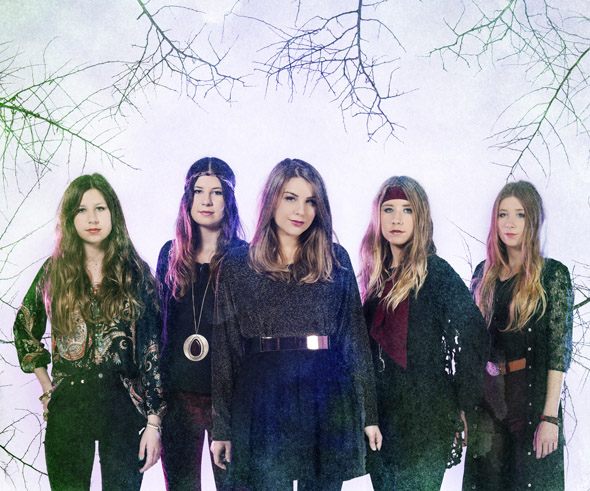 High flying Melbourne artists OWL EYES and STONEFIELD are set to join forces for a national, co-headline tour this August. Under the moniker of Winter Road Trip 2012 the regional tour will promote and support the Australian Government initiative THE LINE, which promotes respectful relationships among Australia's youth and raises awareness about everything from sexting, texting, and cyber-bullying to inappropriate physical behaviour.

"It's just a great campaign because it's not preaching anything, it's just sharing a message of respect and we can do it through music." - Brooke Addamo

Brooke Addamo (Owl Eyes) and Stonefield's Findlay sisters are the latest musical ambassadors to be enlisted in the campaign and will aspire in their roles to spread The Line's positive message throughout the tour and beyond. "It's great to use music to help convey a message - especially a message about respect and just making people aware of it. One of the things I love about music is that you can help people and teach people about things." - Amy Findlay

"When it comes to relationships, you have to have respect. It's about knowing where to draw the line, making that clear difference between what's ok and what's not. It's about respecting yourself and others." - Brooke Addamo

It is the first time the Wunderkind label sisters have toured together and both artists are excited about not only spreading The Line's message via their music and performance, but also by the anticipation of their time on the road together through predominantly regional areas of Australia.

"I feel like out in the regional places they don't always get a lot of live music or get an opportunity to get out to a lot of venues or anything like that so it will be nice to take our music and The Line's message there and spread it around a bit. It will be quite special." commented Brooke, Amy added "Playing in a country town makes a big impact it seems like everyone knows What it is going on and they are so appreciative of it. So I feel like the message will make a big impact."

The five young women, with an average age of less than 19 years hope to utilise their unique position in a male-dominated industry to encourage young people to work towards changing attitudes and behaviour about violence and relationships. They join previous musical ambassadors for The Line Pez, Maya Jupiter and Lisa Mitchell.

The music industry has traditionally been a difficult environment to navigate, and both artists have overcome many obstacles on their way to achieving astounding success in a short amount of time whilst still managing to create true and meaningful connections with their youthful fan bases - Stonefield won the triple J Unearthed High competition in 2010 and have played at The Big Day Out as well as Glastonbury (UK); Owl Eyes has embarked on three sold-out national tours, key supports for the likes of Darwin Deez and The Wombats, as well as featuring in triple j' prestigious Next Crop artists for 2012 - all that with both artists yet to release their debut albums.

Owl Eyes and Stonefield hope to draw on their own positive experiences to encourage fans and friends alike to draw the line!