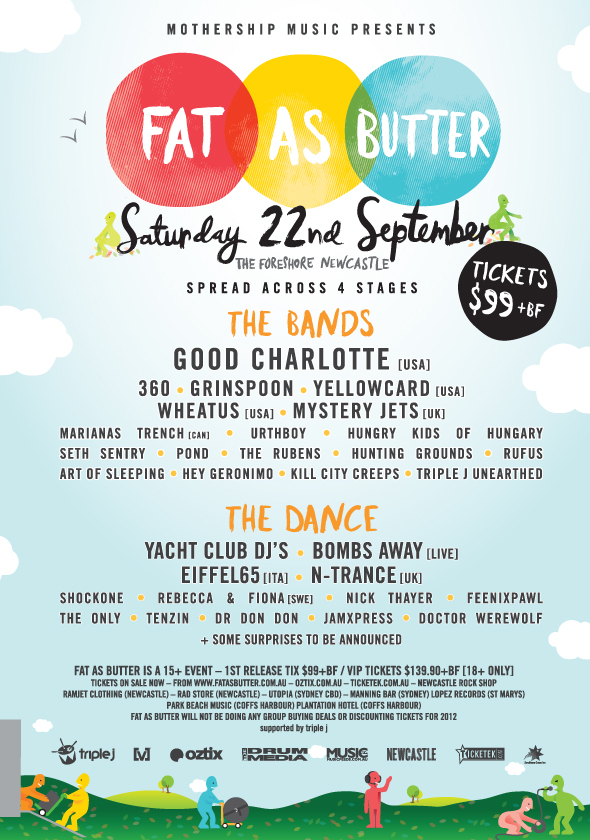 Fat As Butter Festival cordially invites you to our BIG FAT FESTIVAL, this year featuring something old, something new, something borrowed and something blue.

Held on Newcastle's pristine foreshore, Saturday September 22, organizers are excited to announce this year's festival is open to 15 + and the first release of GA tickets will be $99.00 + bf.

Once again the festival will be held across four stages, with a selection of international and local talent, spanning from dance, hip hop, rock, punk and everything in between.

+ Some surprises to be announced

Joel and Benji Madden are bringing Good Charlotte to Newcastle, headlining the day in the only way they know how – loud and proud. After announcing a hiatus in 2011, it didn't take long for the boys to get itchy feet and return to the stage. Their latest single, Last Night, has appeared in American Pie: The Reunion and made it to #3 on the US Billboard Charts. And of course Joel is no stranger to Australian audiences, after just finishing the first season of Channel 9's The Voice.

After a killer six months that has seen 360 notch up a Top 5 ARIA single and album, a platinum single for Boys Like You, two sell-out national tours and the Channel [V] Oz Artist 2011 award, you'd be forgiven for thinking the foul-mouthed Melbourne rapper was running out of available shelf space. Coming off a sold out national tour and a sold out Come Together Festival, 360 is set to be an act that just can't be missed.

Aussie rock legends Grinspoon will add some classic Aussie rock to the bill, on the back of the release of their seventh studio album. US pop-punkers Yellowcard are returning to the stage after a two-year hiatus, college rockers Wheatus will undoubtedly bring back teenage dirtbag memories, while Mystery Jets, bring a taste of UK indie pop. And be prepared for anything when Canada's Marianas Trench, hit the stage. The band are known for their 'creative' stage entrances, the boys have been known to arrive on stage in a bouncy castle riding inflatable horses, inside human sized hamster balls, a hot tub, a large float, and carrying a party subway sandwich for fans in 2007.

Adding some old skool fun for the day will be Eiffel 65 who dominated the international charts in 1999 with "Blue (Da Ba Dee)" hitting the #1 stop around the world. And British outfit N-Trance, who sold over 5 million records world wide and will tear up the dance floor with their hits "Set You Free", "Stayin' Alive", "Da Ya Think I'm Sexy?"

If variety is the spice of life, Fat As Butter is proud to announce one FAT and FLAVOURSOME lineup.

Fat As Butter is open to everyone 15 years and older. 18+ only VIP area available for those wishing to up the ante for their FAB experience!