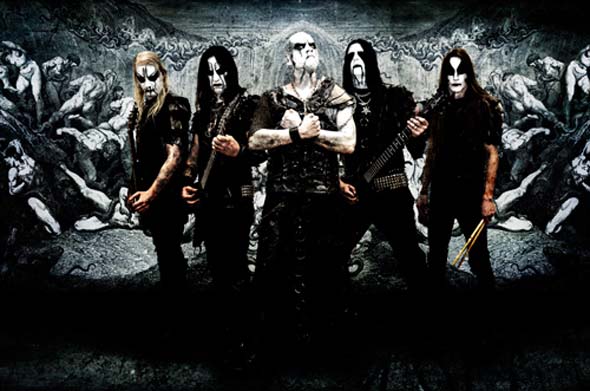 Swedish Black Metallers Dark Funeral return to Australia once again to terrorise our stages with "vast walls of sound" and their "classic black metal, with clouds of red dry ice and an ominous electronic drone announcing the songs" (Metal Hammer)

Forming in 1993 in Sweden, Dark Funeral are a force to be reckoned with, due to their in your face, satanic, dark metal music known across the land as "one of the leading black metal bands."- All Music.

Dark Funeral's stage show is unlike any other. In addition to their intense musical ferocity, their performances are adorned with all the stagecraft the black metal genre can deliver; corpse paint, weapons, spikes and fire breathing. It's a spectacle you can only comprehend live and in the flesh.

Dark Funeral's war machine has been firing on all infernal cylinders since their formation. They have crafted the signature Dark Funeral sound featuring complex melodies and Satanic lyrics melded with freakish speed, unbound aggression and sheer, blasphemous volume. Dark Funeral built their metal empire through over 15 years of constant touring and recording consistently acclaimed EPs and albums. Their dedication to devastation, both live and in the studio, has earned them a reputation as the most sinful and powerful band of their genre with a world wide following to prove it.

Featuring a new unholy line-up of committed conspirators, Dark Funeral bring their "magnificently brutal" Nordic black metal blizzard back to Australia to stake their claim amongst the premier elite of the black metal world.