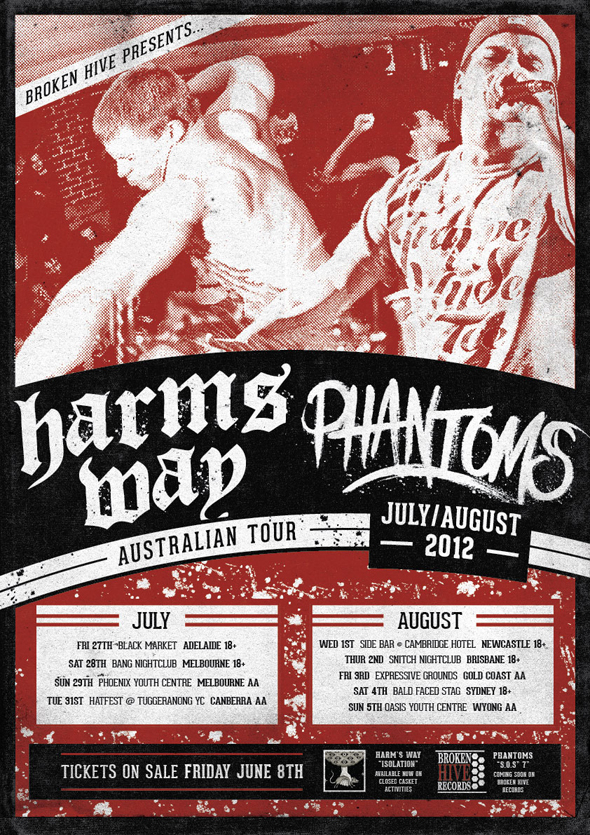 This July/August, two of the world's most exciting hardest bands, Harms Way and Phantoms will be dominating the East Coast of Australia on a co-headline tour sure to ignite the pit. Harms Way from Chicago, USA have been described as a "rewarding journey through the hardest of sonic assaults" and are notorious for their intense live shows. Their most recent release, Isolation (Closed Casket Activities) was received with high praise, described as a fusion of heavy hardcore and Entombed style distortion. Harms Way deal in everything heavy and hard and they will be making their first trip to Australia.

Phantoms are known for their distinctive hardcore style and relentless touring and this July will see the launch of their new 7' Save Our Souls on Broken Hive Records. In celebration of the new release they will hit the road once more to play some new songs as well as tracks from much loved album "As Above, So Below." Having toured this year with Deez Nuts and selected shows with Trapped Under Ice including a high profile spot on Break The Ice Fest, Phantoms will return to ever growing audiences.

Harms Way and Phantoms will share the stage this July/August in what is sure to be one of the biggest packages Australian hardcore will see in 2012.