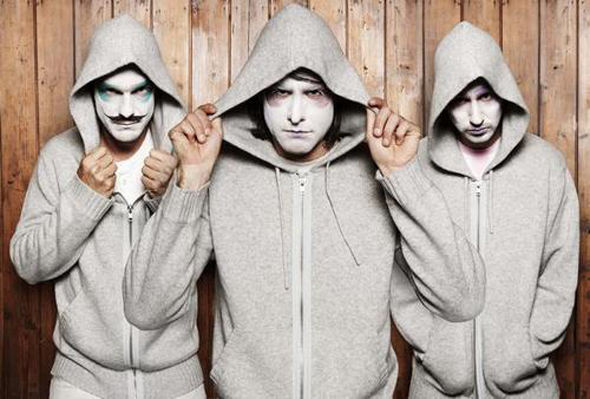 The self-proclaimed 'three headed band with the one man name', MIIKE SNOW, return for two very special headline shows this winter to reunite with Australian fans in Sydney and Melbourne.

Two thirds Swedish producers Bloodshy & Avant and one third Mark Ronson collaborator Andrew Wyatt, MIIKE SNOW are currently celebrating the release of their new album Happy To You (out now through Universal).

For Happy To You MIIKE SNOW developed their captivating sound further, elevating the production qualities that have made them industry names in their own rights and exercising their musical dexterity through the use of strings, horns, trumpets, glockenspiels and a marching band.

Whilst fans have been devouring euphoric first single 'Paddling Out' in living rooms, cars and on dancefloors the world over, critics have praised the band's willingness to escalate things to a whole new level:

"Happy To You does well to prove they're just as good on the other side of the mixing console, showcasing the furthest extents of their own considerable talents for the second straight album." - Consequence Of Sound

"Infinitely more coherent and infinitely more innovatively produced than the debut, Happy To You is a bold, brassy (literally on The Devil's Work) statement of intent...It's a delight." - BBC UK

The band recently performed to record breaking crowds as stage 2 headliners at Coachella Festival, followed by a string of sold out North American shows. They are now set to embark on a European tour that has seen ticket allocations exhausted across the continent.

One of 2009's biggest breakout successes, MIIKE SNOW took over dance floors and festival grounds across the world with their eponymously titled debut album and its hits 'Silvia' and 'Animal'.

Their decision to release a second album confirmed their plans to continue as a band rather than a project, an idea cemented by extensive touring which saw them perform throughout 27 countries in 18 months, including Australian shows in 2010.

The masked trio blew local audiences away with their impeccable live production and performance skills:

"The whole night was euphoric, plain and simple...one of the best live shows I've experienced in the past five years, and along with everyone there that night, I eagerly await their return to do it all over again." - The AU Review

The wait is over. With July not far off, fans need to act fast to avoid missing out on MIIKE SNOW's phenomenal shows or otherwise face being left out in the cold.

Tickets On Sale MAY 21!
Need your live music fix?