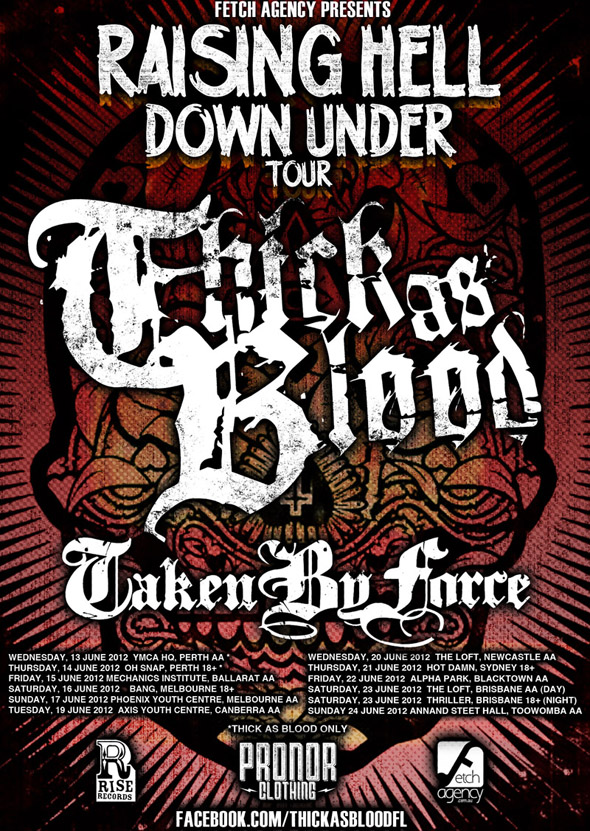 Fans have waited a long time, but finally Miami's Thick As Blood are heading to Australia for a run of shows across the country this June. Their brand of hardcore merges metal elements like crushing riffs with brutally honest lyrics, which has seen them take the hardcore world by storm. Joining them on all dates will be Newcastle's Taken By Force.

Thick As Blood have been building a loyal following since 2004 with two releases on prominent hardcore label Eulogy. Couple that with a hard hitting live show that has seen them tour with the likes of Every Time I Die, Emmure and Terror, and Thick As Blood are a force to be reckoned with. To top it off, the band recently entered the studio with Terror's Nick Jett to record for their Rise Records debut, due out later this year.

Formed in 2009, Taken By Force take fast, hard-hitting riffs and add uncompromising vocals to create an in your face style of hardcore. Having cut their teeth playing with Newcastle icons like Dropsaw and The Dead Walk, the band recorded their debut album, Taking Back What's Mine. This release saw them play with heavy-hitting internationals like Death Before Dishonor, Backtrack and Emmure. Now the band is preparing for a follow up EP and continue playing their aggressive hardcore all over the country.

This combination of bands will prove to be one of the most legit hardcore tours of 2012. Dust off your camo and head along to one of the shows when they launch an assault across Australia.

Search for THE OCEAN here.
Touring May