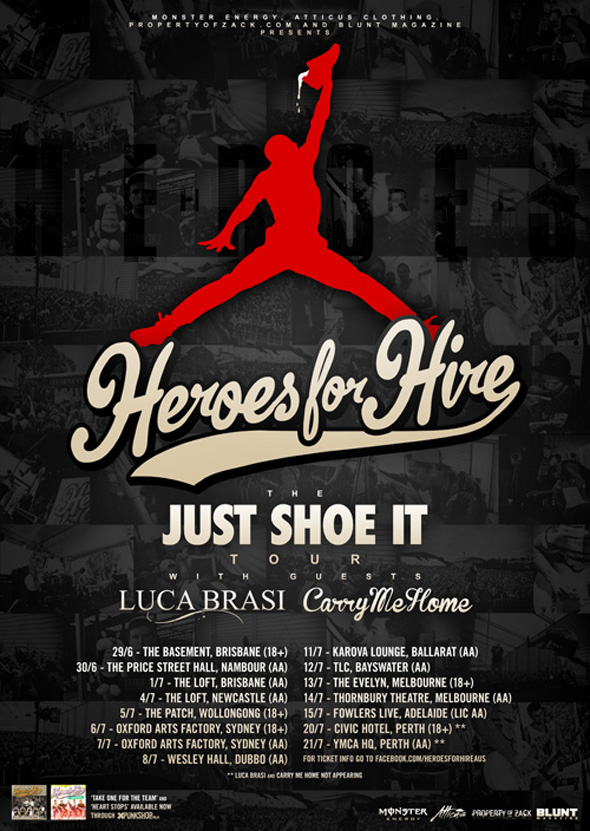 Heroes For Hire kicked off 2012 with a bang, touring nationally on the Soundwave Festival (alongside Slipknot, A Day To Remember, The Used, You Me At Six and many more) and playing to their biggest crowds to date.

The group has also found time to write and release 2 brand new tracks this year. The first, Heart Stops, premiered in the days leading up to the Soundwave Festival, with the tune quickly finding a home on radio stations throughout Australia, while the songs accompanying video raced towards 100,000 plays in a little over a month!

The second of these is Set In Stone, featuring Joel Birch of The Amity Affliction, which was coupled with a video documenting Heroes tour antics throughout the Soundwave Festival. Set In Stone premiered internationally via taste making US site propertyofzack.com, with the track receiving some serious attention both at home in Australia and abroad, so much so that the band was invited to tour Japan for the first time supporting Mayday Parade, Every Avenue and There For Tomorrow!

The Just Shoe It tour will see Heroes For Hire embark on their most extensive headline run to date, with support coming from two of Australia's most promising young punk acts.

Forming in 2009, Tasmanian four-piece Luca Brasi cut their teeth playing in pubs, lounge rooms, kitchens and anywhere else that was game enough to play to host their raucous brand of melodic punk rock. Released last year, their debut full-length Extended Family has turned plenty of heads, netting Luca Brasi shows with everyone from local legends Frenzal Rhomb through to touring acts like No Use For A Name and Senses Fail.

Featuring members of Confession and I Killed The Prom Queen, Carry Me Home is the latest Australian act to throw their hat into the pop-punk ring. Only forming in the earlier part of this year, the group has already hit the studio to record their eleven-track debut, Get Wet, which features guest vocals from Andrew Neufeld of Comeback Kid.

Don't miss the Just Shoe It tour when it hits your town this June and July!