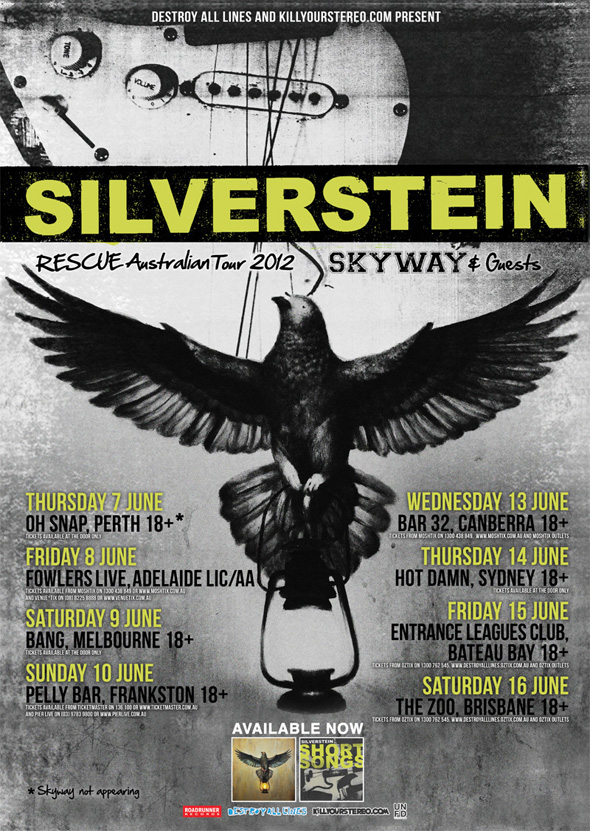 Australian audiences were given their first taste of Silverstein in 2005 with a whirlwind tour of five cities in as many days. Silverstein maintained the demanding pace, returning several times to continue building on their loyal Aussie fanbase with unwavering live performances in between American and European tour and festival dates. Their 2006 Australian tour sold out, proving Silverstein had well and truly become a crowd favourite. From here they went on to headline the Boys Of Summer tour in 2008. In a reflection of the longevity of their sound, the hardworking quintet most recently appeared on the national Soundwave tour, playing to thousands of fans in each city and converting as many more. Fans new and old alike will revel in the news of the forthcoming Rescue Australian Tour, which will showcase the band's high energy emotive live show in more intimate club sized settings.

After more than a decade together, the quintet approached their two most recent releases differently to their earlier efforts. Eager to break from the workman like album / tour / album / tour grind that produced four records in six years, Silverstein wrote Rescue over the course of a full year, which was a first for the band. The result is a definitive work, an album that summarises the best of their past while looking decidedly forward to the future.

Consisting of twenty-two songs under 90 seconds each, the Short Songs project showcases two different "sides" of the Toronto-based hardcore band: Side A consists of eleven originals and Side B is comprised of covers of punk songs that the band has always held in high esteem, including tracks from NOFX, Green Day, Descendents and Gob. Drummer and founding member Paul Koehler explains "Short Songs is an extension of Rescue and a further channeling of our influences in our own material. We're writing the music that we like and get to showcase it in this creative way." "This is definitely a passion project," concludes Paul about Short Songs, "and it's definitely one that has been an incredible amount of fun to put together."