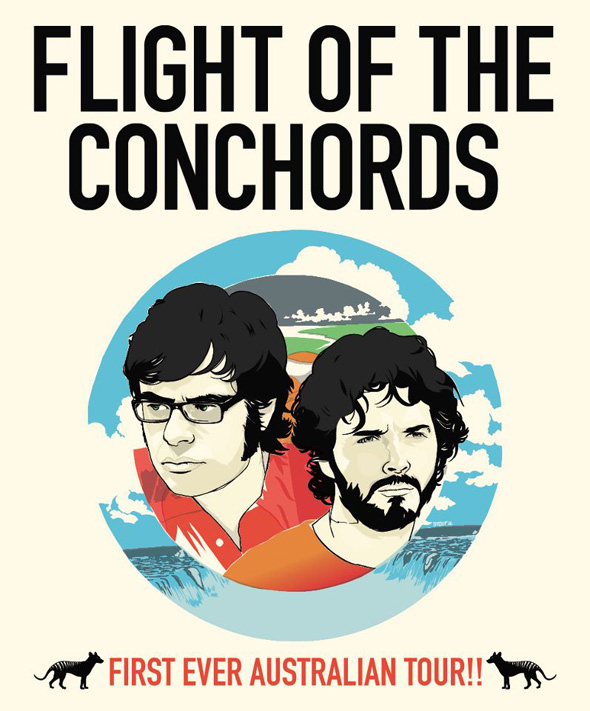 The wait is over - New Zealand's much loved folk comedy duo Flight Of The Conchords are finally coming to Australia! The Frontier Touring Company will be bringing Kiwi funny men Bret McKenzie and Jemaine Clement to visit fans on the other side of the Tasman for their first ever run of Australian headline shows this July.

Jemaine said of the announcement; "We are finally returning to Australia. Mostly to apologise." In a buoyant career spanning almost fifteen years, Flight Of The Conchords has become one of Australia's favourite comedy and musical acts, with the band gaining notoriety for their hilarious ditties including 'Carol Brown', 'Foux Da Fafa', 'Epileptic Dogs' and many more.

New Zealand's self-proclaimed 'fourth most popular folk-parody duo' make musical comedy an art form. Throughout their live performances the duo picks up multiple instruments, including the ukulele, toy piano, keytar, synth and a '1987 DG-20 Casio electric guitar set to mandolin' to create the sounds of some of the most bizarrely wonderful crowd singalongs heard on-stage.

After getting their start in stand up comedy, Bret and Jemaine created a radio series for BBC Radio 2 before launching into acclaimed HBO comedy series Flight Of The Conchords which propelled the duo into the limelight on a global scale. The series spanned two seasons and earned them a massive 10 Emmy nominations and a WGA nomination for Best Comedy Series.

The musical musings of Flight Of The Conchords formed the backbone of their much loved, self titled series and were celebrated in two highly successful soundtracks; Flight Of The Conchords and I Told You I Was Freaky (out now through Sub Pop). These albums earned the band six spots in the Triple J Hottest 100 over two years for hits like 'Business Time', 'Hurt Feelings' and 'Too Many Dicks on the Dancefloor'.

"It's safe to say this is the most endlessly playable comedy album of the new millennium." - Uncut

"I Told You I Was Freaky is a smart, funny, musically vast album, giving everyone's favourite Kiwis a chance to broaden the canvas of their twitchy, awkward, displaced brand of comedy." - musicOMH

"Even shorn of their comedic context, the best of these tracks still have the power to rupture internal organs at 20 paces... What separates this from any other comedy pastiche is the quality of the songs." - Pitchfork

Far from strangers to the spotlight, Flight Of The Conchords have come a long way from winning Best Newcomer at the Melbourne International Comedy Festival more than a decade ago.

Most recently, both performers have been pursuing the big screen. Bret took on the role of Music Supervisor for The Muppets movie and recently won the Best Original Song Oscar for his composition Man Or Muppet. This track beat out its counterpart from the film Rio to win the award, a film that coincidentally featured Bret's partner in crime and upcoming Men In Black III star Jemaine Clement.

It's hard to pinpoint what has kept the duo from touring our shores all this time, was it band manager Murray's inability to get the guys a gig outside of an aquarium, Bret's commitments to his sign holding job or Jemaine's fear that his Aussie ex-girlfriend Keitha would be waiting eagerly for his arrival? Regardless, one thing's for sure - it's going to be one heck of a good time.

Between the incredible songwriting, witty on stage banter and catchy melodies that will be stuck in your head for days, Bret and Jemaine are reuniting once again for these very special shows to guarantee a night of fun that will leave you singing about 'Sugarlumps' and the epic 'Hiphopopotamus vs. Rhymenoceros' rap battle for days afterwards.

Come hang out with New Zealand's best export after sheep's wool, as Flight Of The Conchords woo you with their fearless rhymes, tough urban beats and the best daggy jumpers their country has to offer.

Search for THE MOUNTAIN GOATS here.
Touring May