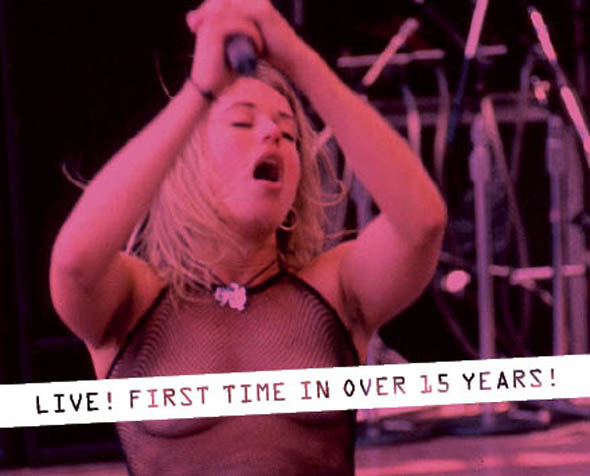 You've heard the rumours, now it's time for the facts. This May and June, Metropolis Touring is proud to announce the return of one of Australia's most extraordinary electro dance-rock groups, DEF FX. Lead by the ever-vivacious lead vocalist, Fiona Horne, and original bass player Martyn Basha, the band is set to rock audiences when they take the stage in Brisbane, Melbourne and Sydney for their first shows in 15 years.

Formed in Sydney in 1990, DEF FX carved out a unique place in Australian music - both sonically and iconically. At the core of the band's success and their critical and public attention was their inimitable blend of electronic beats and samples, rock/metal instrumentation and grunge vocals, which saw them draw comparisons with artists as disparate as Pink Floyd, Metallica and The Prodigy. Add to this the charm and charisma of the enchanting Horne and a killer live show, and you have a winning combination that saw DEF FX maintain the intrigue and fascination of audiences well beyond the duration of their recording history.

Throughout their career, DEF FX developed the reputation for being one of the hardest working bands in the country. Not surprisingly, they also developed one of the most amazing live shows, with a focal point being the performances of the always-enigmatic Horne. As well as their own tours, the band played the 1992 Concert for Life, the 1992, 1994 and 1995 Livid Festivals, the 1995 Alternative Nation Concert, played the Homebake Festival and supported the Smashing Pumpkins in 1996 and took the stage a mammoth four times at the Big Day Out in 1994, 1995, 1996, and 1997.

Despite numerous line-up changes, DEF FX worked hard to establish a solid fan base that saw them grow from strength to strength from their early releases through to mainstream success. It was, of course, the support from these fans that saw DEF FX enjoy consecutive number ones on the ARIA Independent Charts from 1990 throughout their career, and hold the record for having three releases in the ARIA Top 20 Independent Charts at the same time in 1992 - the Water EP, the Surge EP and the Blink EP.

In 1992, the band released their debut album LIGHT SPEED COLLISION, which featured the singles 'Space Time Disco', 'No Time For Nowhere' and 'Sex Game Sucker' (from the Blink EP). The album reached No. 84 on the ARIA Charts, and for told of the good fortune to come for DEF FX.

The band's early EPs were collected together and released as the BAPTISM album in 1993. This was followed shortly after by the release of the POST MORONIC EP in 1994. The EP was another charting success for the band, reaching No. 43 on the ARIA Charts, and spawned the triple J hit 'Masses Like Asses', which also ranked in the 1994 Hottest 100.

During 1995 DEF FX started their own label, Cicada Music, on which they rereleased most of their old material as well as the more experimental album, RITUAL ETERNAL. Later that same year the band released 'Psychoactive Summer'. More pop than their previous releases, 'Psychoactive Summer' was an instant hit on both triple J (No. 51 on the 1995 triple J Hottest 100) and commercial stations, and reached No. 42 on the ARIA Charts.

In 1996, DEF FX released their final and by far most successful album, MAJICK, which reached gold sales status in 1997. Featuring the songs 'Psychoactive Summer', 'I'll Be Your Majick' (No. 61 on the 1996 triple J Hottest 100), and 'Spell On You', the album integrated more pop and electronica into their sound than any of their previous releases.

Now, with the announcement of the reunion tour, fans will get their chance to relive the sounds of DEF FX and be a part of the evolution of DEF FX history. Original members Horne and Basha will be joined by Ant Banister (founding member of the 90's label and electronic art music collective, Clan Analogue) and NSW's North Coast sonic metal rock guitarist, Wiley Cochrane.

Joining DEF FX in Sydney and Melbourne is 90s industrial rockers, INSURGE. With 20 years of politically charged music powering behind them, including the triple J hit 'I Hate Stupid People' INSURGE is sure to get audiences electrified and at the ready!

Don't miss the DEF FX reunion tour this May and June!