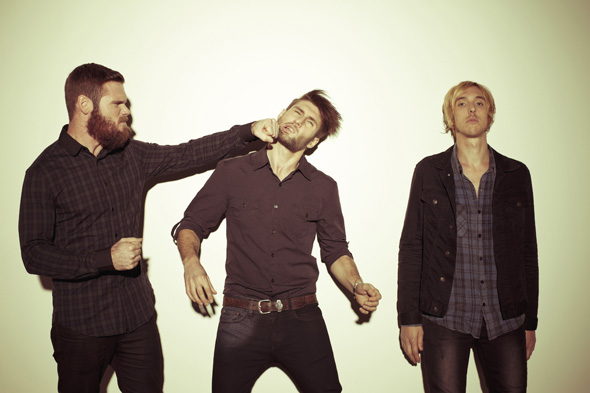 Rewind to August last year - CALLING ALL CARS released their second album, the ARIA charting "Dancing with a Dead Man", and set off on a tour cycle around the country. Taking their triple j featured album to the masses on the back of national airplay and hot supporting cast that introduced Redcoats and Boy In A Box they played to sold out rooms and stamped themselves as one of Australia's most incendiary, young, live rock bands.

Calling All Cars finished 2011 in a blaze of glory supporting their new best friends' the Foo Fighters and being added to the East Coast run of The Big Day Out. After an unexpected blow to the jaw of lead vocalist Haydn Ing prematurely ended their Sydney Big Day Out performance earlier this year, Melbourne's Calling All Cars have bounced off the rock & roll canvas and are ready to rumble!

With the starters flag unfurled Calling All Cars are set to roll out THE DELIRIUM TOUR, and in their continuing efforts in the war against the jive have invited co-conspirators Strangers and Arts Martial along for the fun.

Named after the barn storming, live favourite 'She's Delirious' and with a new video by the same creative team that made their 'Reptile' and 'World's Collide' clips, this 12 show victory lap around the country will be their last national headline tour before taking a well-earned break and beginning the process that will create album number three!