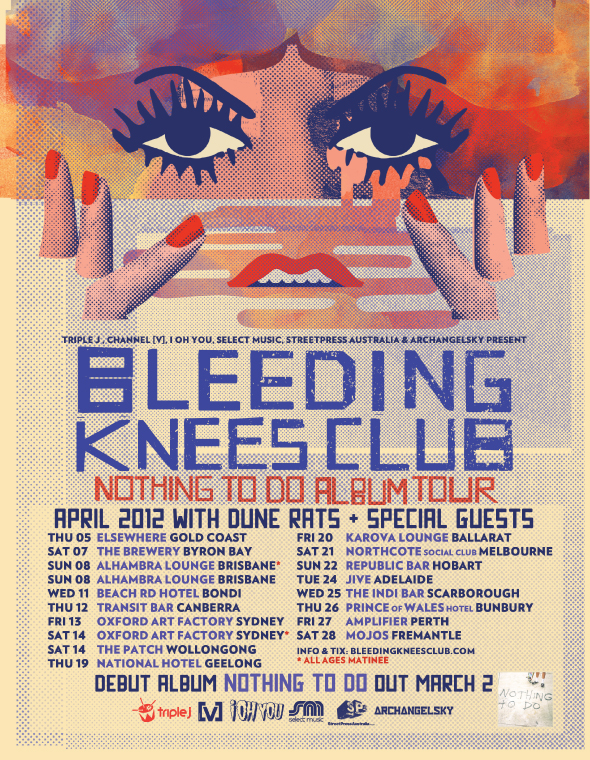 Hot on the heels of new single "Nothing To Do", the Gold Coast's garage-pop bombshells Bleeding Knees Club are psyched to announce their Australian album-release tour dates throughout April.

The extensive run immediately follows their UK and USA album-release tour which includes NME and Vice parties in London, as well as New York and LA club dates, and a swag of key South By Southwest showcases. Joined by fellow Queensland slackers Dune Rats, the Australian run also includes first visits to some regional areas and special all ages matinee performances.

"Nothing To Do" is released via IOHYOU on 2nd March. It's an album that neatly encapsulates everything that's made the world fall in love with Bleeding Knees Club these past 18 months : it's a raw 'n' urgent set of super-fun songs about girls, getting high, and sticking it to The Man.

Recorded in New York City in-between the pair's hectic touring schedule last year, "Nothing To Do" was produced by Dev Hynes (from Blood Orange and Lightspeed Champion), and then mixed in London by Dan Grech (The Vaccines). Its recently-unleashed title track is a disarmingly simple ode to boredom, and once again demonstrates the pair's knack in crafting the catchiest ramshackle nuggets of spat-out punk around. It's joined lead-off single "Teenage Girls" in getting flogged on triple j and public radio, and had The Fly (UK) frothing "It's deliriously catchy - bloody good fun."

Adding to the carefree party vibe will be the visceral energy of Dune Rats. Following an explosive start to 2012, featuring on a swag of international support tours, Dune Rats will prime crowds perfectly with their catchy mix of garage surf pop.

Recently named by NME as one of the 100 New Bands To Watch in 2012, Bleeding Knees Club are getting ready to own worldwide this year. Join the Club, there's nothing else to do.