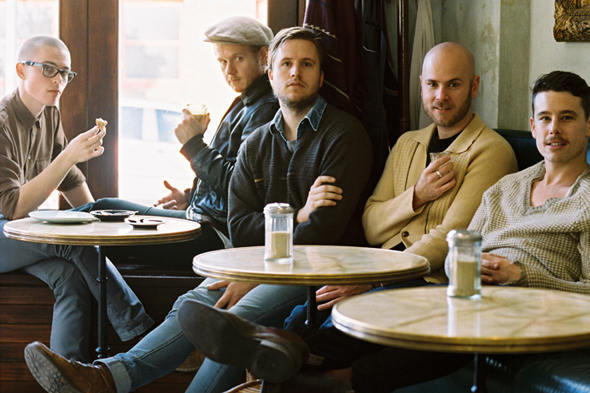 Australia is in for one big treat from Boy & Bear as they look to thank their fans for what has been a year of big journeys and greater accomplishments for the Sydney quintet. From Adelaide to Albury, Brisbane to Bunbury, Cairns to Canberra, Boy & Bear will be dropping into every corner of the country in May to reflect on where it all began and give a nod to those who made it happen.

It doesn't seem that long ago that the nation was falling in love with one of Boy & Bear's pivotal first singles, 'Mexican Mavis'. Creeping slowly through the national airwaves, discovered by music lovers and settling itself in minds across the country, 'Mexican Mavis' was an accidental statement of intent. The knowledge of the five gentlemen from Sydney grew; generated mainly by their passionate followers, and soon the gathering that Boy & Bear found themselves in front of had turned into a congregation.

Boy & Bear has grown into a bigger beast then even the five core members could have ever imagined. Their EP, driven by singles 'Mexican Mavis' and 'Rabbit Song' saw them tour internationally, gain praise from tough critics and get the nod from triple j; winning the Unearthed JAward. Now their debut album "Moonfire" is receiving all the attention; securing five ARIA awards, a prestigious shortlist nomination for The Amp and entering triple j's hottest 100 three times, with single 'Feeding Line' reaching the top five.

But this is one band to not forget their roots, keeping themselves firmly grounded with friends and family in Sydney, they now look forward to sharing their success in the form of a huge 25 date tour. Playing intimate rooms in regional areas, they have intentionally kept capacities low to make for some very special performances for those who have supported the band from the beginning.

Tickets to Boy & Bear's Remembering The Mexican Tour will go on sale this Monday, 27th February.