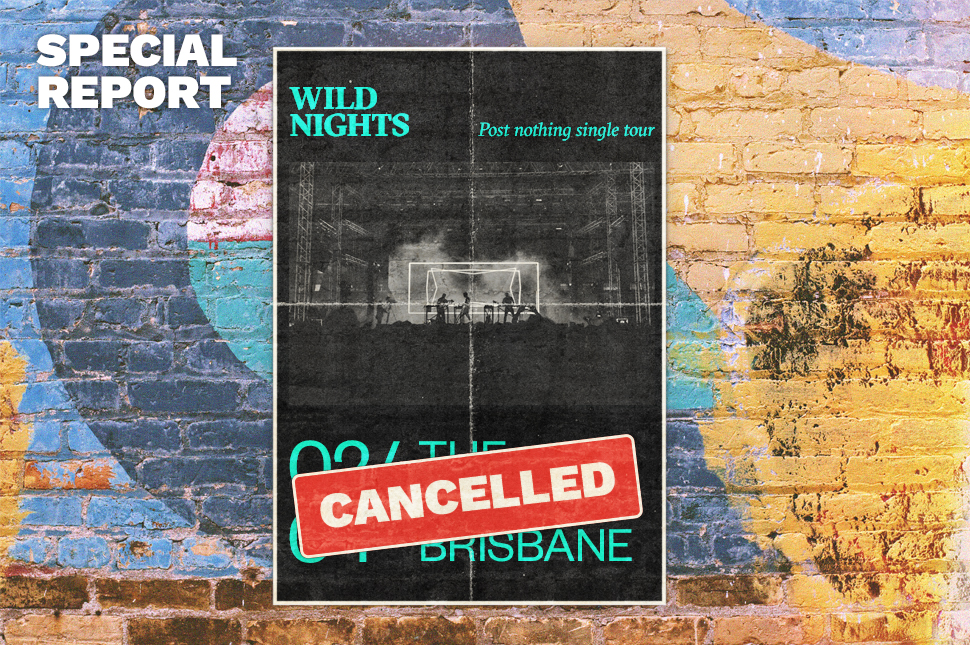 While Queensland hasn't officially shut its borders during the current three-day lockdown, the impact of the outbreak has already been felt with a number of shows and tours cancelled.

Following on from warnings from industry leaders over the past few weeks, and with the end of JobKeeper, the music industry currently faces further crisis after a tumultuous 12 months with shows, tours and recording plans constantly facing cancellation with sudden lockdowns and border closures.

READ MORE: Industry Reacts To Bluesfest Cancellation - 'This Is A Watershed Moment'

In the 24 hours since the announced Brisbane lockdown, The Music has been inundated with stories from artists and industry about its impact.

Kate Miller-Heidke is scheduled to play Bluesfest this Friday. The Melbourne-based artist will now perform her set as a duo instead of with her Brisbane-based band and crew. The show was due to be both the band and crew's first show and pay cheque of the year.

Brisbane's Valhalore have had to cancel their upcoming east coast tour again saying, "Four out of 10 shows were due to take place in Victoria, meaning that nearly half of the potential income from the tour has disappeared. This has rendered the remaining dates too great a financial risk to continue without, and as a result all the shows have had to be cancelled".

It's not just live shows that have been effected; recording has been impacted too. Alex The Astronaut (real name Alex Lynn) was due to record in Brisbane this week with Ball Park Music's Sam Cromack to produce. Lynn took a 9am Sydney to Brisbane flight only to fly home almost immediately due to the impending lockdown - a costly endeavour at the best of times. For Cromack, it's a week of lost work and pay.

Melbourne band Thornhill have also shared their experience with The Music today, saying that in addition to cancelling shows they are also facing a two-week quarantine period at home after recently playing in Brisbane.

"At the end of March 2021, Thornhill played our first Australian shows in Brisbane since November 2019, which was our first chance to make a small amount of income from touring in over 16 months," they said today.

"Unfortunately, with the recent Queensland outbreak, the mandatory 14-day quarantine means that we are now losing income from our part time jobs as well as needing to cancel other shows on the tour which were supposed to be played during this two week period.

"The estimated loss from the cancelled shows is approximately $25,000 along with a further $11,300 collectively amongst the eight person tour party’s day jobs."

While in no way a criticism of the snap lockdown - which has proven effective in Victoria, South Australia and New South Wales - it does beg the question, how can the music industry plan (and more so, recover) when touring is at a constant risk of cancellation?

"These issues are not just for Queensland-based venues and events that have to be cancelled. The bigger issue is anyone who is an artist or crew or business team member based in Queensland can't travel interstate meaning cancellations and rescheduling of countless events in every other states as well," said Select Music Agency CEO, Stephen Wade.

"As an industry we follow rules better than anyone, so if it means we can continue to work we will handle any protocols put in front of us then let's push through the essential music industry worker permit and make it a priority right now!

"These issues ram home the fact this is a national industry that needs a national solution (involving the State Governments' support) to help us as an industry move forward."

"ALMBC acknowledges the importance of public safety and we have always been supportive of any move to protect the community," Australian Live Music Business Council (ALMBC) executive general manager Craig Spann told The Music.

“However, what we are seeing unfold right now is a nightmare scenario that will once again put our industry backwards. Venues and events across Queensland are being forced to cancel shows, robbing the broader industry of even more income just as wage support through JobKeeper is cut completely.

“Further complicating matters is the series of border restrictions being put in place across the country controlling travel from people who may have even just passed through Brisbane. These border controls continue to devastate confidence around domestic touring, one thing we need to get out industry back to some kind of normal.

“ALMBC will continue to call for all States to work with our industry to develop a national touring permit system that will allow our industry to stay on the road when incidents like this occur. We simply can no longer afford to absorb this kind of hit and we need Governments at all levels to come to the table to work with us in finding solutions.

"The recent small cluster in Queensland and subsequent snap closing of almost all state borders today is crippling our industry," added Destroy All Lines' general manager of touring Chris O'Brien.

"We are planning with zero confidence as there is no national strategy to handle outbreaks for the entertainment industry.

"With no notice our artists are having to take on huge losses on top of what they have lost already. They have not received state or Federal grants and they have lost JobKeeper. They have now lost their ability to make a little bit of money, even in reduced capacity venues.

"Sport can operate to huge levels nationally. They can cram 1,000 people standing and sitting side-by-side per train in an enclosed tube with no open windows for people travelling to and from the games. As far as I am aware we have been given no health advice to why that is any different to a normal capacity live music venue.

"We understand the health of our nation remains the priority but we are begging with health authorities to give us the same level playing field they give other industries.

"Whilst the recent Federal grant announcement was applauded by some in our industry I can tell you the vast majority of us do not share that view. It does nothing to address the actual issues at hand which are snap border closures and venue density capacities. Let us get back to work safely."