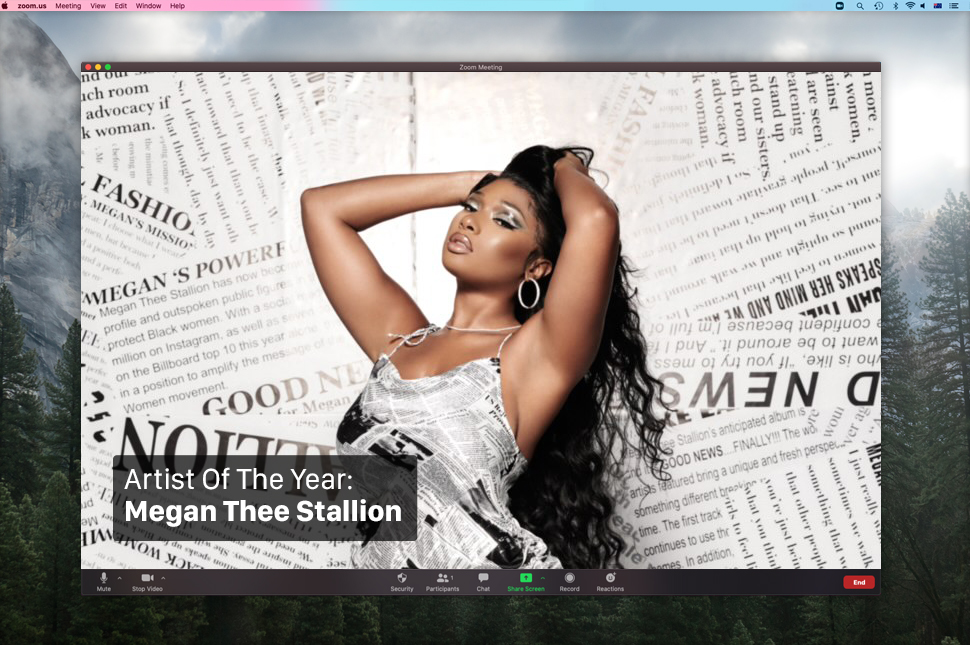 At times throughout this year, it's certainly felt like the apocalypse might actually, kinda, just about, be happening. Seeing Megan Thee Stallion and her Mad Max-esque BET Awards performance did manage to bring some hot girl shit to it though.

2020 could have been a year where artists retreated, locked themselves away and quietly worked on their next project. Instead, what we've seen are artists that have shown up, demanding equality and compassion (head over to our song of the year story here to find out more about that).

Megan Thee Stallion is one of these artists and it probably won't come as a surprise that the 25-year-old Texan lands at #1 on our artists of the year list. A key player in the year's most celebrated - and perhaps most controversial - track, WAP with Cardi B, Megan Pete has cemented herself as one of hip hop's most influential.

Then, of course, there's Savage: a track that saw Pete fly up the charts globally (including #4 in both the US and Australia), earned her a remix with none other than Beyonce and sparked another dance trend on TikTok. The year closed out the release of Pete's debut studio album, Good News, and triumphant single, Body.

In second place, Taylor Swift's change of tune - from country to out and out folk, that is - earned her stacks of acclaim following the release of Folklore in July (and subsequent album Evermore in December). Following on from the turbulence surrounding her back catalogue and ongoing legal issues with Scooter Braun, it feels like 2020 has ushered in a new era of Swift.

The incredible Sampa The Great claims third on this list for the second year in a row, still riding high from the success of her debut album The Return. In a year filled with career highlights, the Melbourne-based artist has claimed the Australian Music Prize, won a slew of awards, shared incredible shows and then wrapped it up with an ARIA Award performance for the history books. A must-see (she even took out our poll's live performance of the year category. Again.)

The list returns to US artists for positions four, five and six with Run The Jewels, Bruce Springsteen and Phoebe Bridgers.

RTJ4, the fourth studio album from hip hop duo El-P and Killer Mike, was an immediate heavy hitter for the year, with reviewer James d'Apice calling it "truly a record for its time and of its time" upon release. You'd probably struggle to find a more cameo-d album too, with the likes of Rage Against The Machine's Zack de la Rocha, Mavis Staples, Josh Homme, Pharrell Williams making appearances. Springsteen's Letter To You saw his legendary E Street Band return for the first time since 2014's High Hopes. Despite being 'The Boss', Springsteen isn't one to rest of his laurels, instead challenging himself and the band to record live for the first time and also make a documentary in the process. Find out more about it here (and also how Springsteen handled the year of the Zoom call). Few albums hit like Phoebe Bridgers' Punisher did in 2020. The album, her second, was just one of Bridgers' highlights for the year though; see the launch of her own label, Saddest Factory, and her impressive Courtney Barnett collab.

Australia's Nick Cave got introspective in 2020, much like the rest of us. Initially, he went into "overdrive with ideas of how to fill that space" left bare from cancelled tours, considering everything from writing an album to hosting a live-streamed cooking show. Ultimately though, we were gifted the striking Idiot Prayer: Nick Cave Alone At Alexandra, a live-streamed event that saw Cave perform solo from London's Alexandra Palace in a single take. It's a rare artist that can make you feel both haunted and uplifted at the same time. Read the full review of Cave's performance here.

Another artist not only bucking the trend for the year, but creating their own, was Fiona Apple. The US artist released one of the year's most talked-about albums with Fetch The Bolt Cutters; just the fifth studio album in her extensive career. At a time where we needed it most, Apple told us that, "The message in the whole record is just: Fetch the fucking bolt cutters and get yourself out of the situation you’re in, whatever it is that you don’t like." Hear, hear. HAIM, who come in at #9, drew us in too with Women In Music Pt III; an album that gets deeply personal and proves once again why they're so universally loved and respected.

It's a tie for 10th position this year and you can understand why - how could anyone be forced to choose between the ever-evolving Ball Park Music, the vibrant Charli XCX, the now disco queen Kylie Minogue and the always charming Rolling Blackouts Coastal Fever? Give them all the crown we say.