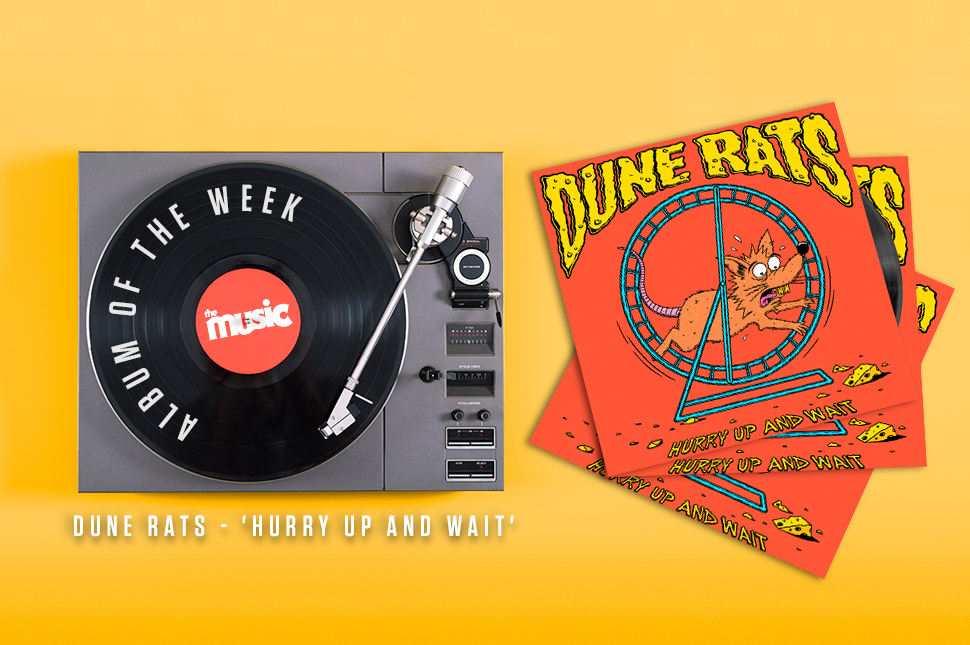 Dune Rats are back with their third studio album, Hurry Up And Wait.

The title feels pretty apt given that it's been a solid three years since the release of The Kids Will Know It's Bullshit. The album scored the Brisbane trio two ARIA Award nominations (Best Rock Album and Best Cover Art) and saw them debut at #1 on the ARIA Albums Chart.

Produced by Violent Soho's James Tidswell, the time between albums shows growth for the group. While Dune Rats have held onto their staples throughout, it also feels that they've delved a bit deeper than just songs to have a good time to with tracks like Crazy and Bad Habits.

"This is our favourite album we’ve ever made," said drummer BC Michaels. "It took a few years to get it together but we got to go to a bunch of cool places and we are super proud of it. We’d be stoked if other people like it as much as us."

Don't worry though, the fun-time Dunies are still here too - really, how could any album with a track called Mountains Come And Go But Aussie Pub Rock Lives On (Forever) not be a good one?

"Hurry Up And Wait is as delightfully grotty as it is undeniably Aussie. Lead singer Danny Beus’ off-pitch shouting, combined with their grungy punk beats gives off a contagious, 'I don’t care what anyone thinks,’ attitude, and the urge to belt out the lyrics as loudly and as drunkenly as possible is almost overwhelming.

"But hiding in plain sight among those carefree vibes are some clever lyrics, which reflect on their experiences in a very down-to-earth way. This really stands out in some of their less lively tracks like Patience and The Skids, but if you can manage to stop jumping around to their lead single No Plans, you’ll find the same hilariously candid observations."

“We didn’t want to make the same album as The Kids Will Know It’s Bullshit but we also didn’t want to reinvent ourselves or anything like that," frontman Danny Beus told The Music.

"It was good taking our time on the album around when we weren’t touring and make the album we wanted to make. We’re fucking stoked with it and hope other people like it as much as us."

"There's a bunch of subtle and dank references to our lives over the past few years littered throughout the lyrics on this record and feels epic to lean in and back what we are singing about when we play the songs live."