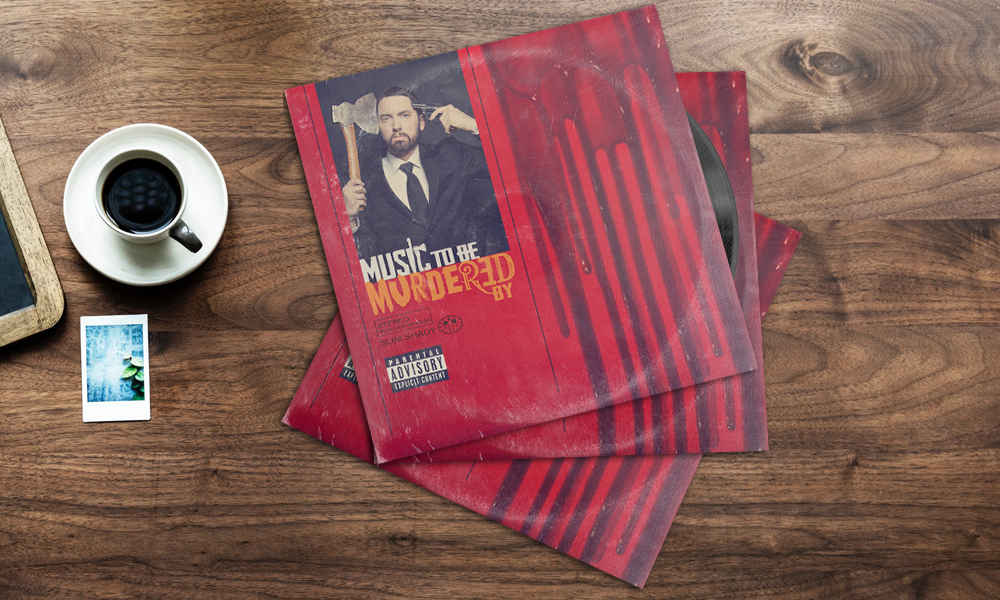 The Detroit hip hop renegade Eminem (aka Marshall Mathers) has always been ruthless as an MC. But would he intentionally stealth release an album on the same day as Mac Miller's posthumous Circles, shifting the pop culture narrative and viral focus? Ironically, that is the foremost controversy surrounding his new double album, Music To Be Murdered By (MTBMB). It doesn't help Mathers' cause that on the song Unaccommodating he embroils Miller's ex-girlfriend, Ariana Grande. But, while savage, Mathers has never been petty.

In recent years, the Rap God has been preoccupied with his own relevance to the point where it's become a meta-theme in the music. Mathers' dilemma is that he's traditionally traded on shock value as much as formidable skill. However, in the era of intersectional feminism, he's facing greater pressure to account for his yikes! humour. Indeed, Mathers thrived on cancel culture before it was called cancel culture. Still, the media, and some loud hip hop fans, hated on his most socially-attuned (or 'woke') album, 2017's Revival, which addressed Donald Trump's rise and US race relations. This was unfortunate, considering Eminem involved so many female artists alone – one Beyoncé. (On Metacritic, Revival has the lowest score of any Eminem album at 50.) In fact, Revival was intelligently transitional. Within months, Mathers, the battler of battlers, stealthed Kamikaze, a self-conscious apologia – and shady comeback. (In the meantime, Tyler, The Creator, once compared to Mathers, breezily evolved from enfant terrible into bohemian soulster.)

MTBMB catches Mathers being himself, but in an arch or stylised manner. It is a horrorcore album – albeit with a postmodern twist. Mathers plays on the idea of hip hop bodying. And so MTBMB is loosely conceptual; Mathers lifting inspiration from "Uncle" Alfred Hitchcock, the fabled English film director of thrillers such as Psycho – or, specifically, his obscure 1958 record Music To Be Murdered By. Not only is the title virtually identical, but Mathers also emulates the artwork and then samples Hitchcock's spoken word between his songs. Overall, with his dense lyricism, Mathers reveals a flair for the zeitgeist auteur rap. He is as paradoxical, and contradictory, as ever. But, conspicuously, on his 11th solo album, Mathers is not over-trying. The 2020 Mathers isn't as reactionary as he was on Revival – its song Chloraseptic a missive at mumble rappers. And Mathers doesn't direct anything obviously inflammatory at foes like Nick Cannon. Nonetheless, he is sensitive to criticism.

Mathers' more emotionally vulnerable songs, and awareness of his neuroses, presaged the nihilistic interiority of cloud rap – which, in turn, opened the way for transgressive emo-pop artists like Billie Eilish. (070 Shake has a brutal song in The Pines on MODUS VIVENDI.) With MTBMB, Mathers is astutely bridging these generational gaps – not ready to be hip hop's 'OK boomer" guy. He contemporises his sound, shedding a little of the blue collar rock-hop. Mathers' Aftermath Entertainment boss, Dr Dre, is more hands-on than of yore, with production credits on several cuts. Yet Mathers is working, too, with DA Doman (or DA Got That Dope), who's produced Tyga. The guests will surprise. Mathers has brought in Juice WRLD, a known Slim Shady stan, who tragically, and shockingly, died in December at 21.

So – dial Eminem for murder?

Opening MTBMB (and its first part) is the defiant Premonition. Mathers ruminates on riding out the negative response to Revival and, latterly, Kamikaze. Not unjustifiably, he exposes his critics' inconsistencies. Above all, he defends his legacy – and longevity (Mathers did celebrate the 20th anniversary of The Slim Shady LP in 2019). Mathers also questions the generationalism he himself fostered with Chloraseptic, observing that 2 Chainz is a veteran, too. His bars are blazing. The trap track has co-production from Dr Dre and a haunting vocal by the Sunday Service Choir's Nikki Grier.

The hardhitting Unaccommodating is about Mathers' refusal to change, or compromise, his dark satire to appease anyone. To that end, he revels in the politically-incorrect. Mathers namechecks global villains like Osama bin Laden. But, comparing himself to the Manchester Arena suicide bomber who killed 22 people in 2017, he unleashes the album's most problematic punchline: "But I'm contemplating yelling 'Bombs away' on the game/Like I'm outside of an Ariana Grande concert waiting" – sparking social media outrage. Along the way, the spitter alludes to his "war" with Machine Gun Kelly, declaring it "finished". Mathers is joined on the track by New York's Young MA, the rising queer female hip-hop star behind 2016's hit Ooouuu.

Mathers goes back with Royce da 5'9" – the fellow Detroiter his partner in Bad Meets Evil. Royce accompanied Mathers on last February's Australian stadium tour. He has three cameos on MTBMB (and contributes production), his smooth voice a welcome contrast to Mathers' stridency. On You Gon' Learn, which could be a vintage Kanye West production but with big beats, the duo reflect on past struggles. Bronx newcomer White Gold handles the chorus.

Eminem fans were not exactly thrilled when he united with Ed Sheeran for River on Revival. Mathers has since materialised on the Brit's Remember The Name with 50 Cent off last year's No 6 Collaborations Project. This collab has a latent trop house club vibe (!). It's produced by DA Doman (or DA Got That Dope). Mathers looks back on his wild early days of fame – but the song conveys a certain ambivalence.

Mathers has created a sub-genre out of toxic love songs – most about his ex-wife Kimberly "Kim" Scott. In Too Deep tells of a romantic liaison complicated by its multiple players, conflicted emotions and insecurities. Star cross'd lovers, indeed. Atypically for Mathers, the song bridges BLACKstreet-style R&B and synth-funk – Sly Pyper adding harmonies. Fresh.

Godzilla is bound to be a fan favourite, being Mathers' symbolic collab with Juice WRLD. The bouncy joint, again co-produced by DA Doman, riffs off that old motif of rappers being beasts. Mathers delivers the verses – demonstrating his speed rapping towards the end – while Juice provides the chorus, extolling his Lucid Dreams melodicism.

Darkness, the compelling single from MTBMB, has already generated debate. Mathers, in narrative mode, assumes the voice of Stephen Paddock – the assailant in 2017's mass shooting at the Route 91 Harvest music festival in Las Vegas. But, as the music video highlights, the twist is that Darkness is an allegory for the split between notoriety and celebrity, with Mathers pondering his own mental health as a performer. Darkness conveys the existentialism of a modernist novel – but could it also (inadvertently) eulogise a mass killer? And what does a song like Darkness mean coming from an artist who has always resonated with America's alienated white working-class males? Darkness raises questions that are subtextually disturbing but important. The record builds on Simon & Garfunkel's '60s folk classic, The Sound Of Silence (notably covered by James Blake in 2015), with plaintive piano. (Mathers' early Murder, Murder sampled another Paul Simon song, 50 Ways To Leave Your Lover.) As a plea for US gun control, Darkness may be bizarre – but, then, so was Madonna's disco God Control.

Leaving Heaven is a song retracing Mathers' journey. The rock-leaning song has a suitably big chorus from Skylar Grey, who co-wrote Eminem's Love The Way You Lie, his first Rihanna duet, and is now a regular cohort. Grey has a production credit, as she did on Revival's Walk On Water, blessed by Beyoncé. Leaving Heaven sounds sanguine yet Mathers touches on losing his estranged father last year. The enmity is real as he raps, "Only guts you had was from your stomach fat".

MTBMB has two posse cuts – the rock-rap Yah Yah is the first. Mathers links with Royce, The Roots' frontman Black Thought, and A Tribe Called Quest's GOAT Q-Tip – with his homeboy Denaun Porter (D12's Kon Artis) along for the ride (and producing). It is essentially a hip hop homage. Yah Yah samples Busta Rhymes' '90s anthem, Woo Hah!! Got You All In Check.

Mathers isn't done cleanin' out his closet. The intro cut on the latter part of MTBMB is intense. Mathers alleges physical abuse against him and his mother (and a pet). The track is co-produced by Cali underground figure The Alchemist – who, by coincidence, has worked with Mac Miller. Alas, the stomping beat isn't memorable.

The bassy Marsh is a contender for the album's most superfluous track, being a flex. Mathers feels like an outsider, or rather an extra terrestrial, in hip hop. He again alludes to other rappers – and semi-vows off beefs. Still, with his wordplay, Mathers doesn't do boring.

Like In Too Deep, Never Love Again chronicles a ruptured relationship – but it might also be a figurative song about Mathers' past dependency on prescription drugs. Dr Dre has a production credit. Though the track has a soulful groove, it skirts around trap.

Little Engine, with an ominous horrorcore beat, is about Mathers' inner turmoil. It sounds like it has theremin. Creepy.

16. Lock It Up (featuring Anderson .Paak)

Mathers previously featured alongside his Aftermath labelmate Anderson .Paak on Dr Dre's 2015 Compton album with the (contentious) song Medicine Man. Lock It Up, a subliminal West Coast joint, again has input from Dre, but on the studio side. Paak returns to rap after exploring his soulful persona on 2019's Ventura.

Farewell is another love/hate song – Mathers confessing to his toxic masculinity. The track has a dancehall lilt, sampling Jamaican deejay/singer Serani's hit No Games.

In No Regrets Mathers confesses that he would not change his life for all its drama and trials. He cites recent feuds, including that with Tyler, The Creator – but diminishes them. It may be the album's most modish track, being a trap banger helmed by DA Doman. The chorus is performed by Don Toliver, down with Travis Scott's Cactus Jack fold (the Houstonian participated in the JACKBOYS LP).

The second posse cut on MTBMB sees Mathers joined by a reunited Slaughterhouse – the hip hop supergroup once signed to Shady Records. Well kinda. Missing is Joe Budden – who, as a commentator, railed against Mathers' musical direction on Complex's Everyday Struggle in 2017. He's possibly the target of Mathers' line, "Yeah, your group was off the chain, but you were the weakest ink." I Will is vintage hip-hop for the heads.