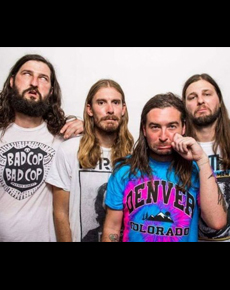 Buy Tickets
Beloved party-punk troupe The Bennies have barely paused for breath this year, having already knocked over an Aussie tour in support of recent album Wisdom Machine as well as shows abroad (including a German festival spot) — but they're not ready to put their feet up yet, announcing an epic national run of shows all around the country this June and July.

They'll be joined by mates and contemporaries Clowns and Axe Girl for all shows except the stretch between Townsville and Karratha (inclusive), where The Bennies will be flying solo, and the final three shows (Perth through Bunbury), where Axe Girl will be the sole support act in tow.

This is the biggest, most expansive tour the band have undertaken on home soil to date, so expect this one to be a giant party of the calibre only an act like The Bennies can deliver.