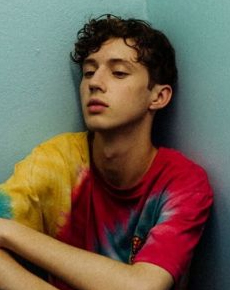 Buy Tickets
20-year-old actor, YouTube sensation and pop superstar Troye Sivan has announced hat following this time taking over the US recently, he'll be returning home to the antipodes for a massive nine-date arena tour this August.

Having appeared on Jimmy Fallon, Ellen, The Late Late Show With James Corden and earlier this week the GLAAD Awards, the Blue Neighbourhood tour will bring his debut album to his first round of headline shows in New Zealand and in most Australian cities (he's played headliners in Sydney and Perth already).

Sivan will bring electro pop songstress Nicole Millar for the ride, as he drops by Christchurch and Auckland, then Sydney on 3 August, Canberra on 4 August, Brisbane on 6 August, Wollongong on 7 August, Melbourne on 9 August, Adelaide on 11 August and in hometown of Perth on 13 August.