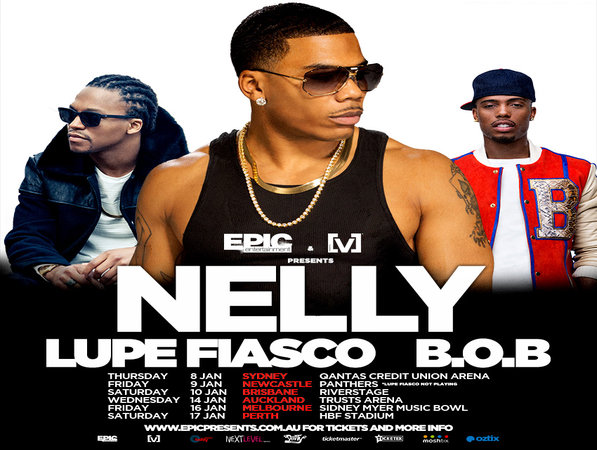 Three of the world's biggest names in hip-hop have confirmed that they will be embarking on an arena tour at the start of 2015. Double Grammy award-winning rapper, Nelly will be joined by Lupe Fiasco and B.o.B for a show-stopping concert, brought to you by Epic Entertainment. The power-house tour will see each artist play a collection of their greatest hits, both old and new.
With over 21 million albums sold, the tour marks Nelly's first visit to Australia in four years, and his first ever arena tour. Joined by Lupe Fiasco and B.o.B, the trio will tour across Australia and New Zealand this summer, with concerts in; Sydney, Newcastle, Melbourne, Brisbane, Auckland and Perth.
Since jumping on the scene with his infectious debut single, 'Country Grammar', Nelly has made a resounding impact in music that can still be felt to this day. Most recently, the multi-platinum, Grammy award-winning rap superstar released his seventh full-length album, M.O., featuring guest appearances by Nicki Minaj, Pharrell, Future, T.I. and 2 Chainz. However, his talent goes beyond music, expanding his brand into other arenas, including acting, fashion and even his own line of energy drinks.
Entrepreneurial rapper, songwriter and producer Lupe Fiasco joins the powerhouse trio on tour. Since blasting onto the scene in 1999, Lupe can be credited for global hits including 'Superstar' and 'The Show Goes On', whist racking up an impressive 12 Grammy nominations and countless other awards.
Breaking musical barriers, B.o.B redefines the term rapper with an impressive blend of lyrics, vocals and memorable hits; including one of 2012's biggest hits 'So Good', which dominated the charts globally. He has collaborations with some of the biggest names in music, including Chris Brown, Taylor Swift, Nicki Minaj, Lil Wayne, Eminem, Bruno Mars and even our very own Potbelleez.
Tour Dates:
SYDNEY THURS 8 JAN QANTAS CREDIT UNION ARENA
MELBOURNE FRI 16 JAN SIDNEY MYER MUSIC BOWL
BRISBANE SAT 10 JAN RIVERSTAGE
PERTH SAT 17 JAN HBF STADIUM
AUCKLAND WED 14 JAN THE TRUSTS ARENA
NEWCASTLE FRI 9 JAN PANTHERS.
Tickets On Sale Now!