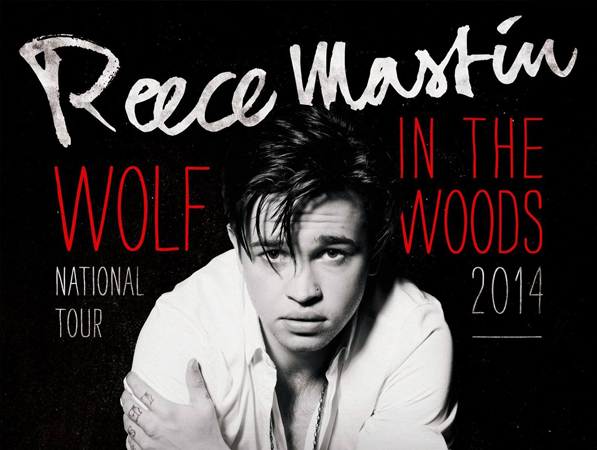 Australia's young rock 'n roll heartthrob, Reece Mastin, is once again packing up his bags and taking the band back out on the road on his Wolf in the Woods Tour commencing in Perth on Friday, 12th September.

This will be the first time Reece has undertaken a major tour of Australia since December 2012, and these shows promise to be "loud, hot and real". The Wolf in the Woods shows will feature new material from Reece's as yet untitled album, due later this year, with intimate, rock venues around the country.

The 18-date tour will take in all mainland capital cities and many regional hubs including first time shows in Renmark, Whyalla and Mount Gambier in Reece's home state of South Australia.

"If you've never come to a show before, this is the one you've been waiting for," Reece said. "And if you thought the last show was good, we have the next level for you!"

He added, "We're traveling to places we haven't been in a while and I can't wait to see everyone again. If you love your music live and loud, then the Wolf in the Woods shows will definitely have you rocking!"

Reece Mastin burst into the Australian consciousness in late 2011 after winning X-Factor. His debut album went double Platinum and hit #1 as well as three consecutive singles that all worked their way into the Top 5 of the ARIA charts. What sets Reece apart from many of his contemporaries is that he is a genuinely talented musician - he's been writing songs and playing the guitar since he was 12 and is heavily involved in the direction of his music.

Fresh off their Australian and US tours supporting P!nk, New York based power trio The Kin, will be bringing their constant hooks, affinity for the shock-factor and undeniable charisma back to Australia when they open all shows on the Wolf in the Woods Tour.
Tickets On Sale Now!