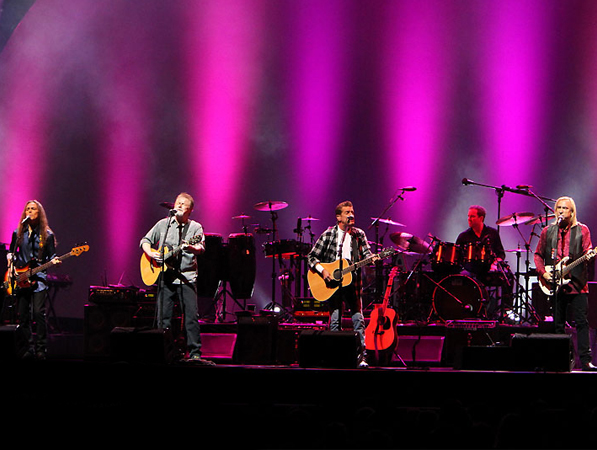 Frontier Touring is thrilled to announce the return of one of music's most iconic groups to our shores. Renowned for their hit laden sell-out concerts, the Eagles are bringing their critically acclaimed 'History of the Eagles' World Tour to Australia in February/March 2015.

Performing a massive run of shows, the tour will include indoor arena dates in Perth, Melbourne and Sydney as well as special outdoor concerts in Hunter Valley and Victoria's iconic Hanging Rock.

Including celebrated favourites such as 'Desperado', 'Take It Easy', 'New Kid In Town', 'Lyin' Eyes' and 'Take It To The Limit', the "History Of The Eagles" global trek has already elated fans across the USA and Canada since their latest world jaunt kicked off in July 2013. Last in Australia in 2010 and New Zealand in 1995, the "History Of the Eagles" tour is a mammoth production spanning the globe - and a show for fans to remember.

It was the creation of an acclaimed Eagles documentary which first spurred the legendary group to head back out on the road. Eagles-mania struck the Sundance Film Festival in January 2013 when the band attended the premiere of History of the Eagles - The Story Of an American Band, a documentary made by Academy Award-winning filmmaker Alison Elwood. Screened in two parts on Showtime in the US and released as a top-selling DVD, after remixing songs for the big screen and unearthing original 16 and 24-track recordings of '70s album cuts it soon became clear to the group that it was time to take their historic harmonies back out in front of their fans. "I was really surprised and reminded of how much fun we had," Glenn Frey told Billboard, about working on the documentary's soundtrack. "It's the story of an American band, but it's also the story of the songs we wrote and what those songs did to [people]. We're here because everybody likes the songs."

Eagles' retrospective "History Of the Eagles" world tour kicked off on July 6, 2013 in Louisville, Kentucky, and continued throughout arenas until Christmas. In January 2014 the band re-opened Los Angeles' venue the Forum with a 28-song set (arranged chronologically) which left critics raving.

Now, fans in the Netherlands, Belgium, England, Germany, Switzerland and Italy will get their turn to experience the band's ultimate set from May-July '14, before Eagles return Stateside for further arena Fall dates from August-October. They'll then head down under to Australia and New Zealand audiences in February/March 2015.

The band re-teamed for a huge live album in 1994, Hell Freezes Over, and a three-year tour, which broke records worldwide and cemented the group's place in music history. 2007's Long Road Out of Eden was a defining disc, with track 'I Dreamed There Was No War' winning a Grammy for Best Pop Instrumental Performance, taking the Eagles on tour to countries as far flung as South Africa, China and Dubai. Inducted into the Rock and Roll Hall of Fame in 1998, the year following the Eagles were honoured by RIAA for 'Best Selling Album of the Century' for compilation Their Greatest Hits (1971-1975). Notably this album remains the highest selling album of all time in the USA.

With those unmistakable West Coast harmonies and the songwriting gems of Glenn Frey and Don Henley, don't miss your chance to see the Eagles make history!
Tickets On Sale JUNE 10!