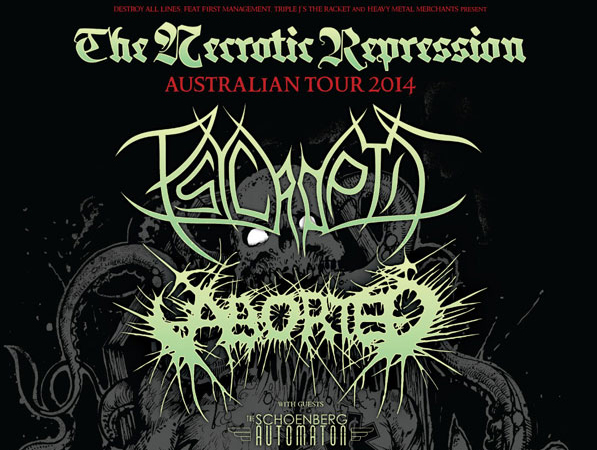 Hailing from the remote island of Tasmania, Psycroptic have progressively carved a niche all their own within today’s overcrowded Metal scene. Staying clear of trends, the band incorporate many elements of music – extreme or otherwise – to capture a sound that is uniquely their own. Not to be pigeonholed, Psycroptic stand apart from the horde and add a fresh element in the extreme metal realm with their precise blend of brutality, intensity and groove.

Psycroptic's latest album 'The Inherited Repression' which was released in February 2012, has been hailed by fans and the media as one of the most original and 'fresh' releases from within the metal realm in years!

In this world, there are many ways to die... there are even more ways to kill! And sonic mass murderers Aborted have elaborately focused on this grim reality since their inception back in 1995. With eight albums under their belts, the current being The Necrotic Manifesto, Aborted have always been deadly serious about their gore.

Delivering aural blows with maximum versatility, hostility and dead on accuracy, they have successfully melded together the sounds of Suffocation, Cannibal Corpse, Carcass, Entombed and many more while retaining their own signature sound and visual identity.

Psycroptic are taking a well deserved break from recording their new as yet untitled album to tour with their long time friends Aborted this June!

Pack a clean pair of underwear because you are guaranteed to soil your drawers from the onslaught of pure, unrelenting brutality that Aborted and Psycroptic combined are set to deliver.
Tickets On Sale Now!