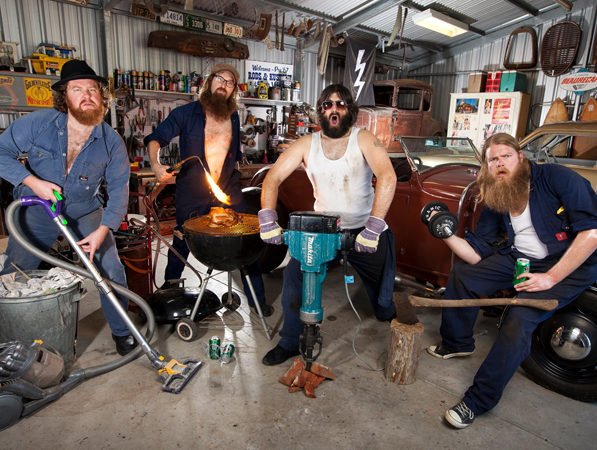 After an already impressive three full-length albums about beards, the world's premier beard-related rock act The Beards are returning with a brand new album, and with it, the most comprehensive Australian tour the band has ever embarked upon. Having built one of the country's most dedicated (and hirsute) fanbases through years of relentless touring, The Beard Album: Australian Launch Tour will encompass almost every corner of the country the band has visited so far, as well as new territories and a first ever trip to New Zealand.

"We've convinced a lot of people to grow beards over the years," claims vocalist Johann Beardraven. "Now, not only do we get to check how their beards are going, but with our new ultra-catchy beard-related tunes, we're confident that we'll be able to inspire a whole new level of beard-growing, right across the country."

Since the release of their highly-acclaimed, ARIA-nominated third album Having a Beard Is The New Not Having a Beard, The Beards have embarked on multiple sold-out Australian tours, sold out shows in Canada, England, Scotland, Germany, The Netherlands and Denmark, performed at SXSW in Austin, Texas, cracked Triple J's Hottest 100, been nominated for APRA Song Of The Year, and grown their beards to impressive new lengths.

And now, in the tradition of The Beatles' White Album and Metallica's Black Album, the release of The Beard Album promises to be a career-defining move from music's hairiest quartet. "Our previous albums were pretty beardy, but we just felt they didn't quite fully sum up our affinity toward beards" explains bassist Nathaniel Beard. "Now with this new album, we feel like we've finally released what will probably go down as the most pro-beard album in history."

With a global fanbase now recognizing the band's perfectly-balanced blend of laugh-out-loud comedic flair and finely tuned musicianship, The Beard Album: Australian Launch Tour promises to cement The Beards' place as one of the most energetic, unpredictable and most-loved live acts in Australia today.
Tickets On Sale Now!