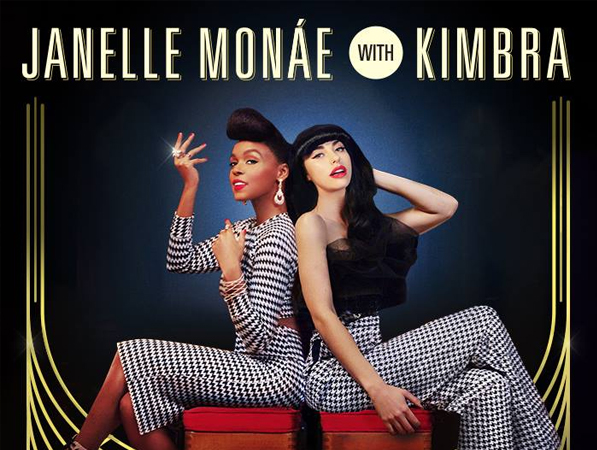 A serendipitous meeting between two music contemporaries - JANELLE MONAE and KIMBRA - was the spark for a new friendship that has developed into a mutual desire to explore a joint creative endeavor, culminating in what will be one of the finest co-headline tours of 2014.

Step back to July 2013 when both Janelle and Kimbra were performing at the Montreux Jazz Festival.

That evening the two artists were in the same Swiss hotel bar with their respective bands. Conversations sparked, bonding over a shared love of Prince, and as the night wore on the collective began jamming in the bar.

The impromptu session cemented their mutual respect for each other's artistry: it was the budding of a deep friendship. The ties between Janelle and Kimbra grew stronger, in tandem with an artistic curiosity and an exploration of different musical languages, and the idea of the tour collaboration was born.

'The Golden Electric Tour' will reveal a stellar show of intertwined joint and individual performances - both artists will perform separate sets with their bands, as well as performing together.

Tickets for all shows go on sale next Thursday, April 17.

My Live Nation members can access tickets first during the exclusive pre-sale beginning this Monday, April 14.
Tickets On Sale APRIL 17!