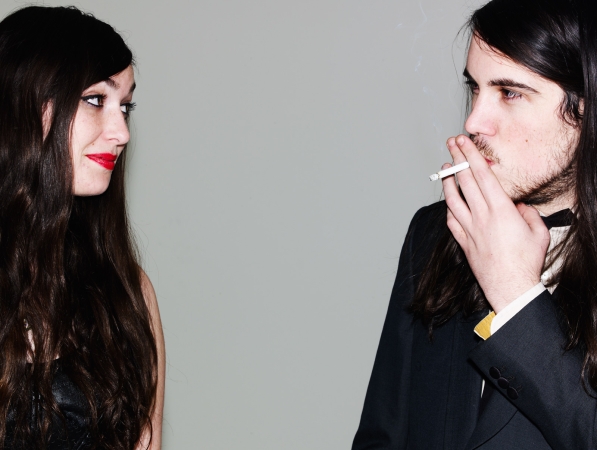 Already confirmed on the lineup for this year's Groovin' The Moo, Laneway Presents can now confirm that New York indie duo, Cults, will be hitting stages across the country for their own headline tour dates. Proudly drawn from the colossal pool of Laneway alumni, this will be Cults' second visit to Australia having wowed audiences across the 2012 run of Laneway dates.

The talented twosome of 24 year olds Madeline Follin and Brian Oblivion will be touring off the back of their latest studio offering, Static, playing Sydney’s Metro Theatre on Tuesday 29th April, The Corner Hotel in Melbourne on Wednesday 30th April, The Zoo in Brisbane on Tuesday 6th May, and The Bakery in Perth on Friday 9th May.

On their 2011 self-titled debut, the pair pondered modern love, seen plaintively through the mood of wistful romance that hovers over the songs with a suggestion that love is an insoluble mystery. Two years on, with their sophomore offering of 'Static', we see the reflection of love lost, tempered musically with an opulent, more frantic edge alongside melancholic lyrics. At times the lilting vocals and lush instrumentation can almost conceal the dour and sobering lyrics. Through an evolution both personal and artistic, also comes with it a expansion of their live performance, with recent gigs being hailed by Consequence of Sound, saying "they were in a new top form, and doubtlessly more confident."

Their eponymous debut saw the band sky-rocket from a blog sensation to an international success in less than a year. Playing to audiences the world over throughout the campaign, the pair undertook a near 3 year tour taking them across the festival circuit from Lollapalooza and All Tomorrow's Parties to Pitchfork and Bonnaroo; not to mention headline shows across Europe, UK, North America and Australasia.

Cults has always been a band to look to both past and present. When the young pair arrived on the New York scene in 2010 with the perfectly formed debut single 'Go Outside', it was described as Phil Spector with hip-hop sensibilities, glee soaked in reverb. Touting a whole gamut of influences from old R&B, their sophomore release, 'Static', takes cues from a long list of artists; 'I Can Hardly Make You Mine' is Petula Clark pounding a Downtown piano beat while fronting a Jesus and Mary Chain maelstrom. The bouncing, shimmering 'Always Forever' and 'We've Got It', rocket girl-group doo-wop into the shoegazer dream-pop stratosphere. 'High Road' gallops through a spaghetti western soundscape in a sandstorm of strings and organ, like Morricone teaching us how to walk like an Egyptian. Though such fantasy might be too shallow for the record's emotional centerpiece, 'Were Before', a duet that is quintessential Cults. "We both needed our own world, just the way were before," Brian and Madeline sing at the same time, though not necessarily together.
Tickets On Sale Now!