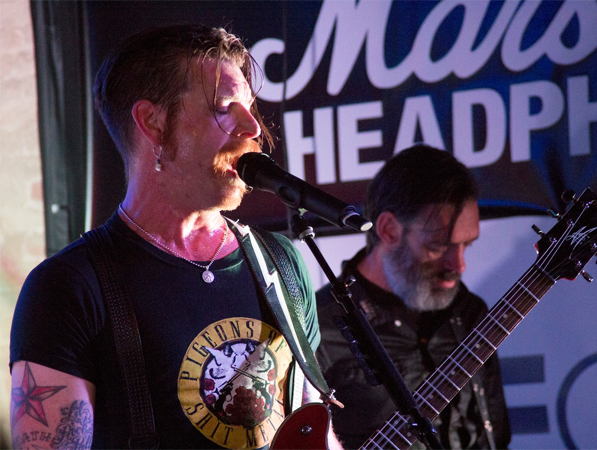 Get ready for a 'blissed out dirty rock ride'! EAGLES OF DEATH METAL are bringing their unique blend of double - entendre boogie to Australian stages again for the first time in 7 years! It's Jesse Huges! Its sex, humour and fun! It's churning guitars and hook-driven choruses and a band whose only agenda is to have a good time! With the band in the studio recording new music, 2014 just got a whole lot shinier! "Hughes delivered a powerful dose of his sex-charged tongue-in-cheek '70s swagger pastiche" - CraveOnline

Joining EODM will be none other than ROCKET FROM THE CRYPT! Australian fans will finally get the chance to see the band after 12 long years! Adorned in flamboyantly matching attire, led by the most charismatic and energetic front man since The King himself, armed with a ferociously ska-free horn section and backed up by a legion of devout rocket-tattoo-stamped fans to boot.

Rounding out a monster night will be none other than MUTEMATH! Australian fans' love affair with this band continues! Rooted in New Orleans rhythm and blues, fusing elements from psychedelia to traditional gospel to modern electronica, MUTEMATH constantly deliver anything but a conventional band experience. "So watertight is their synergy that it makes their daring leaps of style and mood look easy, or more philosophically, an audience trusts a band who trusts each other" - tonedeaf

In reference to the band's latest album, their third studio album and first self-produced effort "Odd Soul", Meany summarizes "I think the title describes this record in every context. It's who we are, where we've been, and what we incidentally sound like when set to music."
Tickets On Sale FEBRUARY 3RD!