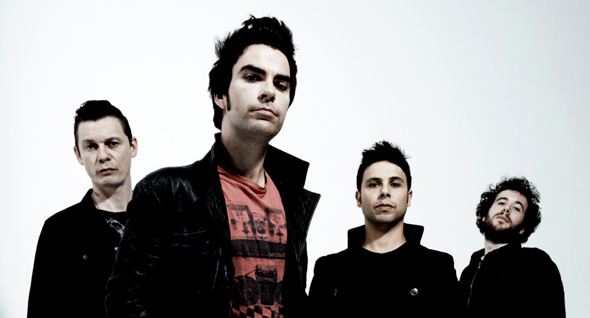 Stereophonics, one of Britain's most dynamic and celebrated live bands, will tour in support of one of their most revered releases to date, the critically acclaimed Graffiti on the Train.

With a stellar career history spanning 21 years - from 1998's BRIT Award for Best New Band, through five consecutive UK #1 albums, to last month's release of their eighth studio recording - Stereophonics have time and again cemented themselves as one of the UK's greatest rock bands.

Stereophonics acclaimed live performances are peppered with a heady repertoire of international smash singles such as 'Dakota', 'Maybe Tomorrow', 'Have A Nice Day', 'Superman', 'Pick A Part That's New' and 'Mr. Writer', plus classic album tracks from their superb seven album back catalogue and their latest studio offering Graffiti on the Train.

ATLAS GENIUS join Stereophonics as special guests. This follows the rave reviews of their SXSW showcase and a massive two-month-plus debut US headline tour, including two sold-out shows at NYC's legendary Bowery Ballroom.

Previous tours of the US with bands such as Silversun Pickups, Wolf Gang and Imagine Dragons, teamed with strong performances on major US chat shows Jimmy Fallon, The Tonight Show, Jimmy Kimmel Live and Letterman have propelled the band into the spotlight, earning their debut hit single 'Trojans' US sales of more than 250,000.

'Trojans' was the first song the then unsigned Adelaide band ever recorded. After it was distributed online in May 2011 via SoundCloud, Spotify, iTunes and the triple j Unearthed sites, blog Neon Gold's high praise of the tune and the subsequent enormous buzz lead to plays on MTV's 120 Minutes and Sirius XM's Alt Nation channel, and iTunes Single of the Week in Australia and New Zealand.

After signing to Warner Music and releasing their debut EP Through The Glass, Atlas Genius delivered their sophisticated and critically acclaimed album When It Was Now in April this year.

Stereophonics, with special guests Atlas Genius, will play one show only in Sydney, Melbourne and Brisbane.

Tickets On Sale May 13