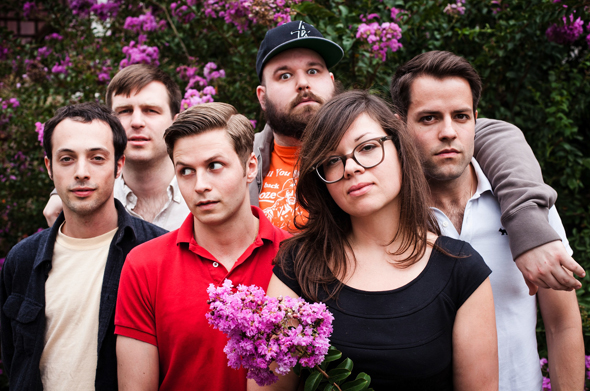 Soundwave Touring presents
FUCKED UP
with O'Brother and The Dear Hunter

FUCKED UP have the most perfect name for any band in rock history. In two words it bluntly states the truth that lies at the heart of the white noise maelstrom - things are different from what you expect.

Despite having toured the world over for nearly a decade, FUCKED UP keep to intimate venues to give fans the chance to turn the place into one giant stomping ground! However, this also means that their shows sell out in no time! "Few bands today can match FUCKED UP's electrifying stage presence... Bodies collided and flew into the walls of more timid onlookers; but there was no violence felt, no desire to hurt one another. For all its musical aggression, FUCKED UP's show is a positive experience." - Clash Music

To become immersed in the world of O'BROTHER you need to take the time to get lost in their sprawling debut full-length, 'Beneath The Garden Window'. As it unfolds, it takes in every unexpected - and often harrowing - stylistic turn. It's powerful and passionate approach makes it an engaging, dense record.

If music is the echo of an invisible world then Casey Crescenzo, mastermind behind THE DEAR HUNTER, has found a way to capture the ineffable through his craft.

THE DEAR HUNTER now proudly presents 'The Colour Spectrum' a nine-EP volume of music that is rife with passion, poignancy, and powerful imagery. Its vast scope and daring premise belie the often simplistic messages found in Casey's words; those of hope, love, faith, fear, death, life, and even afterlife.